Located just a few minutes from the Vatican City – in fact, it’s connected by a walkway the Pope could use to escape attackers – Castel Sant’Angelo in Rome is the perfect place to explore after visiting the Vatican City. Your tour gives you an interesting insight into how the structure has morphed from a mausoleum to a fortress and Papal residence. If the history isn’t enough for you, the view of Rome and the Vatican from the top of the fortress is worth a visit in and of itself.

Note: I received free admission to Castel Sant’Angelo thanks to a 72-hour Roma Pass provided by the tourism board. All opinions are my own. For more information on the Roma Pass or visiting Rome, check out the Tourism Board’s website. You can also contact them on Facebook or via phone at 0039 060608. What is Castel Sant’Angelo?

If you find yourself in the vicinity, the imposing structure is sure to catch your eye. It stands out from the other architecture in the area with its fortified walls and cylindrical tower. It was originally constructed as a mausoleum for the Emperor Hadrian and his family, and the ashes of subsequent emperors were also placed there. A bridge crossing the Tiber River leads directly to the Castel, and the angel statues lining both sides reminded me a bit of the famous Charles Bridge in Prague.

Eventually, the mausoleum was converted to a fortress and the décor was stripped or used as projectiles to defend the fort. I can’t vouch for how accurate my interpretation is, but I had a laugh envisioning beautifully carved Roman statues and urns of ashes being chucked from the ramparts like a scene from “Monty Python and the Holy Grail.” The name Castel Sant’Angelo derives from the legend of the Archangel Michael appearing at the top of the fort to signal the end of a plague. A statue of Michael still adorns the top of the fortress, though it’s not the original one. A few centuries later, the fortress was converted into a castle designed to house the Pope. A fortified walkway leading to the Vatican was constructed so the Pope could escape to the safety of the castle if necessary. That turned out to be good foresight because it was indeed used for the Pope to escape when Rome was sacked in the 1500s.

It’s possible to pre-book tickets to visit the castle so you can skip the line, though the day I visited, there were only about 15 people waiting so I’m not sure it’s worth the extra money. There was a dedicated line for Roma Pass holders, so I got to go right to the front anyway. I was able to just scan my pass at the turnstile rather than redeeming it for a voucher so that sped things up even more.

The posted information was somewhat limited, though there was an audio tour that you could download onto your phone to listen to. That required a ticket code which I didn’t have since I’d used my Roma Pass, so I was unable to check it out. In all honesty, I’m not much of an audio person anyway – I’d much rather read words – so I wasn’t too crushed. The inner cylinder from the original mausoleum at Castel Sant’Angelo.

Your visit to Castel Sant’Angelo begins on the ground level and gradually winds its way up to the top via stairs and ramps. The first level gives you a view of the outer ramparts with some replica weaponry. It also offers the best view of the fortified walkway built for the Popes. If you take a guided tour for an extra 5 euros, you can even go out on the walkway. Check the schedule if you’re interested in that – there are only two English and two Italian tours per day. It’s interesting to see the way the outer walls were constructed around the original cylindrical structure built as a mausoleum. As you wind your way up to the top of Castel Sant’Angelo, you get to learn a bit about how the fort was designed for defense. This long, gradual staircase/ramp you climb up featured a trapdoor so that even if attackers forced their way inside, there were still more obstacles in their path. The brickwork at the very bottom of the photo is the solid stone pathway, and the next two levels are made of wood and designed to drop out from underneath a wave of attackers. You get to walk right over it on your way up the castle. The next level of the castle offers some pretty views of the city, with little cutout windows lining the ramparts. There’s also a little café, so you can sit at an outdoor table and have a snack or a drink before continuing your tour. It’s easy to miss the interior display of uniforms and weaponry as you pass the café, but it’s worth spending a few minutes in the small gallery. I quite enjoyed the elaborate helmets worn by some of the soldiers back in the day. As you continue working your way up, you’ll get a taste of some of the Papal apartments that were created to house the Pope. The grand finale (actually it’s not – you still have some ornately decorated rooms to explore on the way down – but it should be) is an incredible view of Rome and the Vatican City from the top of Castel Sant’Angelo. Once you emerge onto the roof, you can see several of Rome’s famous landmarks as well as the Tiber River right below you. You can also get a glimpse of the statue of the Archangel Michael at the highest point. Spend some time up here enjoying the view – you earned it with all of those stairs you climbed – before making your way back down. You’ll pass through several more rooms that comprise the Papal apartments as you work your way back down. I always love admiring the ridiculously ornate décor in old palaces like that. I often wonder what people would think if I tried to do that in my modern day condo. Have I convinced you to visit? Here are the boring details you’ll need to know before you visit.

Getting to Castel Sant’Angelo

If you’re coming from the Vatican like I did, you can see the castle right from Saint Peter’s Square. It’s slightly less than a kilometer by foot, so I’d recommend just walking.

If you’re traveling by bus, routes 46, 64, and 280 all have stops near Castel Sant’Angelo. Though there are many lines that will get you within half a kilometer. The metro doesn’t service this area, so you’ll need to use a bus if you’re relying on public transportation.

At the time of this writing, adult admission to Castel Sant’Angelo is 14 euros. There are discounts available for visitors qualifying for reduced or free admission. You can find out more details on the website here. (It should translate to English after loading in certain browsers, though there doesn’t appear to be an official English version of the website.)

The castle is open from 9am-7:30pm every day except for holidays. Check the website to see if any holidays or special events will affect your visit. 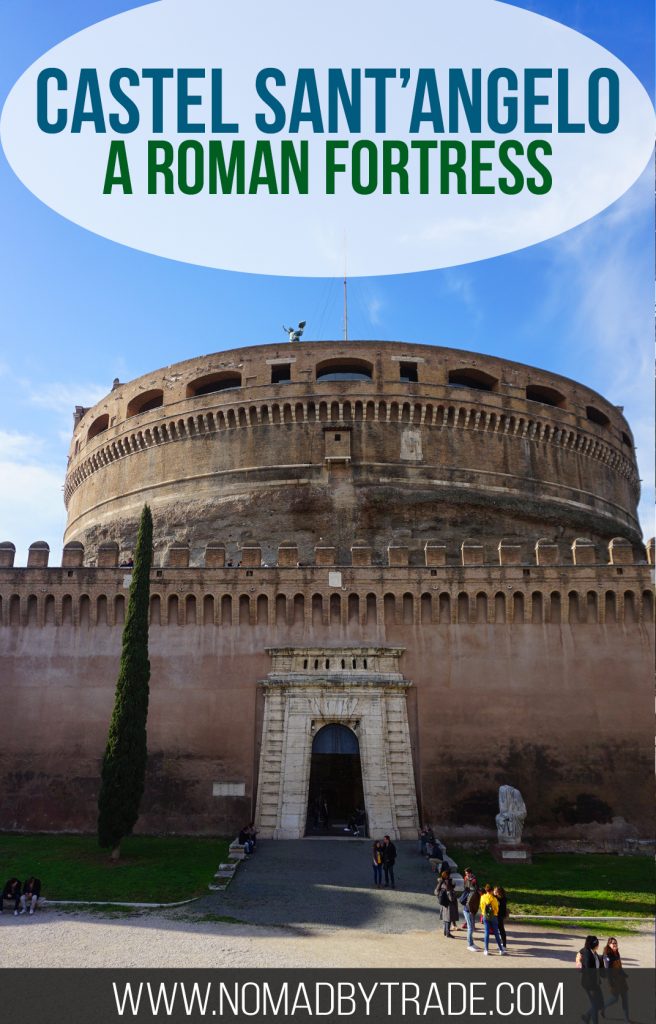