The closer to the Arctic Circle that you get, the more likely you’re going to see them. During very rare solar storms, faint hints of auroras can be visible as far south as where I live in Michigan, but it’s not often and they’re not the spectacular sky shows you’ve seen in pictures. If you want to see them, you’ll have to head north. I spotted them in Iceland, but northern Scandinavia, Canada, Alaska, and Russia all experience this dazzling show on a regular basis. You can also spot the Southern Lights in New Zealand and in southern Argentina. You could also try going to Antarctica, but that’s not easy.

Go during the winter Winter travel isn’t always fun – lugging around all of the requisite warm gear for a cold weather trip isn’t fun, not to mention expensive if you don’t already own that kind of clothing – but your best bet to see the Northern Lights is during the winter months. Why? During the summer, places along the Arctic Circle experience long days – ever heard of the midnight sun? The sky will be too light for much of the time during the summer to have a good chance to spot them. If you can’t handle the cold of winter, try visiting in the spring or fall. You’ll still get reasonably long nights, but experience slightly warmer temperatures.

Get away from other lights This picture would’ve been much better if there weren’t street lights all around the area.

You want the Northern Lights to be the only light around if possible. Though my brother was lucky enough to spot the aurora from right in Reykjavik, you’ll have a much better experience if you get away from city lights. Just like spotting anything in the night sky, light pollution is going to limit your ability to get a quality view.

There’s really no bad place to spot them, but it doesn’t hurt to have some scenery in the foreground if you’re hoping to take pictures. I got to see them dancing over the Geysir area, and later in the trip over a waterfall, and it made the experience even more magical. Of course, even if you set up with great scenery in the foreground, there’s no guarantee that that’s where the Northern Lights will appear. They might end up behind you, so keep an eye out in all directions.

We spotted some faint green in the sky and pulled over ASAP. It eventually grew to this beautiful show.

The first hints are often a faint bit of light that is easily mistaken for a cloud. The first time I saw the Northern Lights (I don’t really count it) was out a plane window. I initially mistook it for city light pollution before I realized that we were way too far north for any cities that large. It began as a faint glow on the horizon before beginning the classic swirling, undulating pattern everyone is familiar with from photos. If you think you’ve spotted an aurora, hold still and keep an eye on it. Watch for any kind of movement.

Another great way to tell is to snap a picture of the faint light. Don’t worry too much about getting it in focus or composing the shot well – if they’re dim enough that you’re  not sure whether you’re actually seeing an aurora, your pictures aren’t going to be that good anyway. The Northern Lights will show up much greener on your camera than in real life. If you snap a shot and it’s green, you’ll know that you’re not imagining things. All that’s left is hoping that they intensify so you get a proper show. Because the best time for viewing the Northern Lights coincides with cold weather, you’re going to want to bundle up if you’re sitting outside waiting for them. I’d highly recommend hanging out in a car or building if you can until you see lights in the sky. Even if you stay sheltered until you’re ready to view them, you’ll definitely want good gloves and a warm coat. If you’re planning on hanging out outside, bring some hot beverages in a thermos and/or hand warmers. Read more of my packing tips for Iceland here. You can see spotty clouds blocking some of the aurora here.

Aurora and cloud cover forecasts are available online if you have access to the internet. I used this cloud cover map frequently when we were there. You’re obviously not going to see them in the sky if it’s overcast. The night we saw the Northern Lights over Geysir, we were in the only tiny patch of the country that wasn’t covered with clouds. It also has an aurora forecast in the top corner showing the expected strength of them. For reference the pictures used in this post were all taken on nights with a level 4 forecast.

NOAA also has great aurora forecast maps that show the expected intensity and pattern for the Northern Lights (and Southern Lights!) that will give you an idea of your likelihood of spotting them. Our awesome tour guide Laufey (read about our snowmobiling and ice caving adventure with her here) told us that in Iceland, the Northern Lights happen every night. You just need to have dark, clear skies and a little bit of patience/luck. 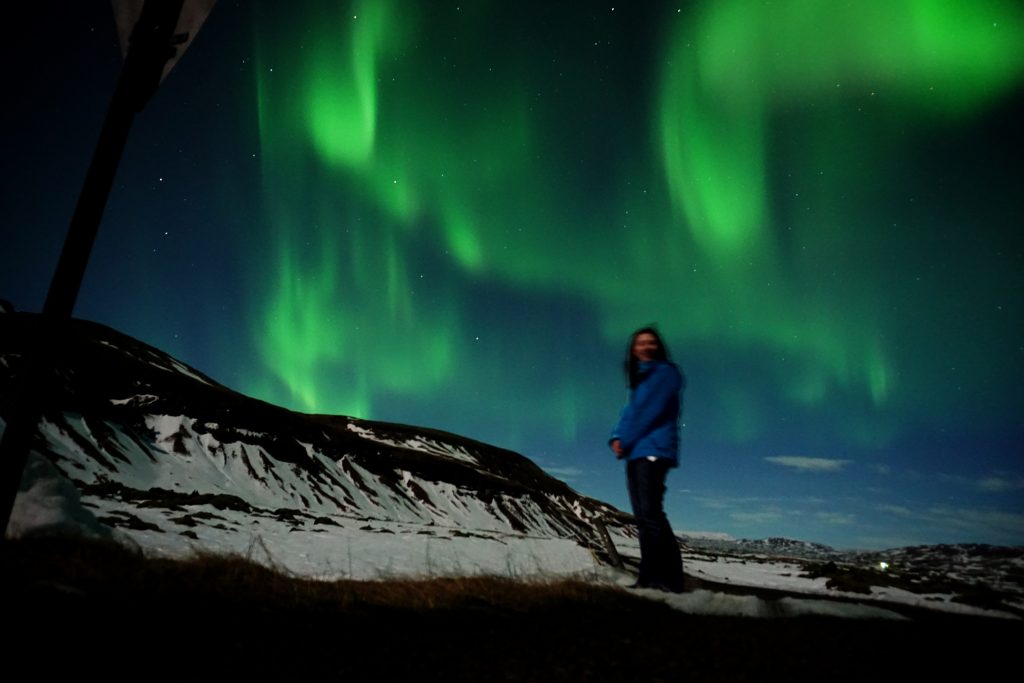 You’ve finally spotted the dancing green lights in the sky. Now what? Enjoy the spectacle of course! This is by far the most important step in your aurora journey. I was jumping up and down with sheer joy the first time I saw the Northern Lights. It was one of the most magical travel moments I’ve ever had. Soak up every second of nature’s best show. If you’re planning on snapping some photos, check out my Amateur’s Guide to Photographing the Northern Lights for some tips for capturing good images. 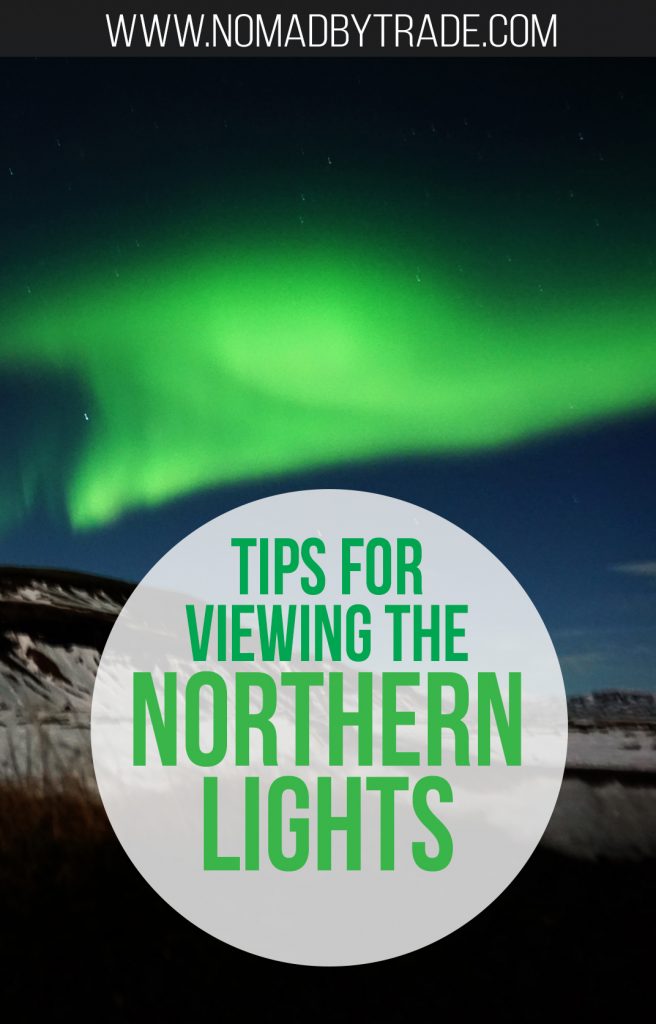