Touring the Top Level of the Colosseum Visiting the Colosseum in Rome had been on my bucket list since before I ever heard the term “bucket list.” When I first caught sight of it on the bus to my hotel, my jaw actually dropped in amazement. It’s amazing to think that such an enormous structure was built using only human and animal strength.

While I was planning my trip, I discovered that the top level of the Colosseum had recently been reopened to visitors for the first time since the 1960s. I knew I had to experience that. As it was the thing I was most looking forward to in Rome, I decided that it was worth splurging on a tour to get the full experience. I ended up taking a 3.5-hour guided tour with City Wonders. It’s also possible to visit the top level of the Colosseum with a ticket purchased straight from the official website, but I gave up on that because with only two weeks left in December, they still hadn’t started selling January dates and I had plans to make. This Colosseum tour is the perfect way to kick off a visit to Italy. Check out this 10-day itinerary for more inspiration.

Note: This post was not sponsored and I paid for the full cost of my tour.

Meeting up for your Colosseum tour The view while you’re waiting to start your Colosseum tour isn’t bad.

Our tour was slated to begin at 8:30 am, and the instructions I received when booking said to meet up 15 minutes prior to that. We met at a little brick area on the hill overlooking the Colosseum. The booking instructions had detailed information about how to reach the spot from three different directions, so finding it shouldn’t be a problem. It’s located almost directly above the Colosseum metro station entrance.

Once there, my name was checked off of a list and I got a little orange sticker to wear on my shirt to show that I was part of the group. A friendly couple from San Diego struck up a conversation with me and offered to take pictures of me whenever I wanted. When our guide started the tour with introductions, she thought we were together and then jokingly adopted me out to them after they corrected her. Our group was mostly made up of families from the US, with an Italian/Australian family rounding things out. If you’re visiting with kids, I’d highly recommend this reading list of books set in Italy.

I’d been staying right across the street from the Colosseum for the last two nights and walking past it every time I went anywhere, so finally getting to step inside on my last morning was pretty exciting. One of the advantages of going with a guided tour is that we got to skip the entrance line. It wasn’t too bad that early in the morning, but later in the day it can get pretty long, especially during the busy season.

Before heading into the main part of the arena, we got a little history about the Colosseum. Did you know that it was constructed in less than ten years? Just think about the amount of stone that was hoisted that high in that short of an amount of time. It was also built as sort of a gift to the people after new emperors took over in order to distance themselves from the unpopular Nero (It turns out he didn’t actually fiddle as Rome burned, but he did build himself a lavish palace on the hill and a manmade lake where the Colosseum is currently located rather than helping his people rebuild their homes and businesses – not exactly a great way to appeal to the masses). They drained his fancy lake and filled it in with concrete – which is part of the reason that the structure has been able to withstand earthquakes over the years – and built the Colosseum where almost everyone could attend gladiator and hunting events to show the people how much cooler they were than that Nero guy who only thought of himself. Politics, amirite?

Unfortunately, most of the south side of the building collapsed over the years. The brickwork on that side is largely a reconstruction that was done during the 1800s. The northern side fared better over the years, and all five rings are mostly intact. The beautiful structure is however marred by pockmarks from holes that were chiseled out to remove the metal brackets holding the blocks of stone together. Most of the marble was also stripped and reused – much of it can be found in nearby St. Peter’s Basilica. Despite using it as a quarry, the Catholic church is actually somewhat responsible for its long-term preservation. Under the false assumption that Christian martyrs were killed there, it was sanctified and there’s still a little chapel inside to this day. It’s amazing to think how much more impressive it would be had it not been stripped over the years though.

Before we headed to our next stop, we met with an official Colosseum guide and had a chance to use the bathroom – definitely a good move.

This level was the arena floor.

Our Colosseum archaeologist guide took us through a locked gate around the side of the main concourse open to visitors. We started out on what would’ve been the arena floor. Looking up at the ruins from that vantage point gives you an idea of what gladiators or criminals would’ve seen when entering. What a sight it must’ve been filled to capacity with 55,000 screaming viewers. 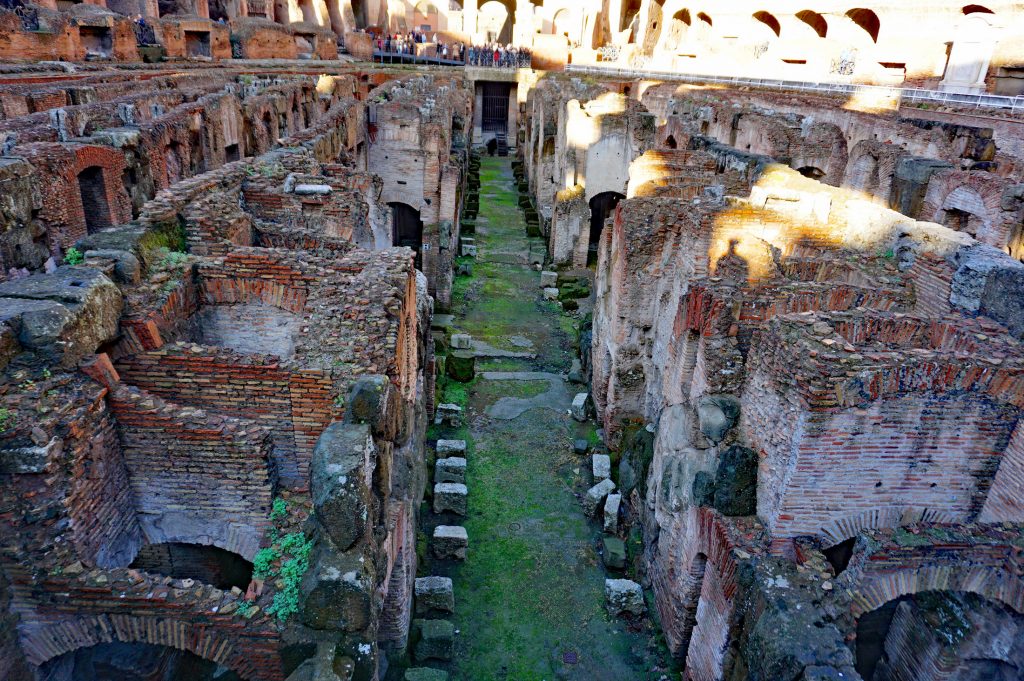 After taking pictures and getting a little bit of history, we headed down a flight of stairs to the underground level. From the bottom, you can see down the rows of remaining walls that would’ve divided animal cages.

There’s a replica of a wooden elevator that was used to bring the animals up to the arena floor. Their cages would appear through trapdoors in the floor as a surprise to the audience.

The top level of the Colosseum

Drag the photo left and right for a panoramic view from the top of the Colosseum.

The top level aka the Belvedere or the fifth level of the Colosseum was only recently reopened. It may have been where the cheap seats were back in the day, but now it offers the best view of the ancient structure.

The actual top level of the Colosseum was made of wood, and only a few fragments of staircases remain, so this is as high up as you can go.

We got several minutes to enjoy the view and take our pictures before heading down. If you don’t want or can’t book a tour that goes up to the fifth level, the third level also offers some pretty good views. Once we made our way back down the stairs, we headed to the Forum. The worst part of being here alone was that growing up going to Disney World, there’s a ride where Steven Tyler from Aerosmith yells, “to the Forum!” (meaning the LA venue, not the actual ancient Roman ruins) and it’s been a running joke in my family for years. Now that we were actually going to the Forum, I had no one with me that would get it.

If I have one complaint about our tour, it’s that the Forum portion felt a little rushed. We ended up running a half hour longer than planned overall, so I think we might’ve stayed a little longer at the Colosseum than scheduled. We got a little bit of the history of the structures, but it felt like we were moving a lot faster here than we had through most of the tour. Julius Caesar was cremated on this altar.

One of the more interesting parts was learning about how the different buildings were repurposed over the years. The ones in the best shape were converted to Catholic churches and preserved over the years. This one is still in use as a place of worship.

I also liked the area that would’ve been occupied by the Vestal Virgins. They lived pretty comfy lives overall by ancient Roman standards, but they were sworn to celibacy and religious purposes. They also wore veils in public. Sound familiar? This tradition evolved into the nuns we still see today. Our final stop on the tour was a climb up Palatine Hill. Our tour guide joked that she was trying to kill us by taking us up to the top, but I didn’t think it was that bad of a climb.

The view was certainly worth it. You can see the whole Forum from the top and the scale of the ruins there is just incredible.

Our tour ended at the exit to the Forum, just southwest of the Colosseum. If you haven’t had enough of Roman ruins by then, you’re only a few blocks from the Circus Maximus, the ruins of the largest stadium the Romans built. Practical information for your Colosseum tour

I booked my tour with City Wonders. In January 2018, it cost 99 euros, which converted to about $116 when it hit my credit card. It was worth every penny.

The tour was scheduled to last 3.5 hours, though it ended up lasting four.

This particular itinerary was running twice a day when I booked it for January. Times and frequencies will likely vary throughout the year.

There is lots of walking and stair climbing involved. Make sure you’re able to handle both so you don’t miss out on parts of the tour, and wear comfy shoes with good non-slip soles. I checked my Fitbit at the end of the tour and was at 3.5 miles and 35 flights of stairs. I’d estimate that about a quarter mile and three-four flights can be attributed to me walking to the meeting point, so you can plan on at least 3 miles of walking plus 30 flights.

Getting to the Colosseum

The group tour meets directly above the Colosseum metro stop on the blue line. There are also tons of bus routes that stop right by the Colosseum. Once you reach your stop, you just have to walk up the hill overlooking the Colosseum or enter the metro station and take the stairs. Refer to your booking instructions for detailed directions.

Looking for more great Rome activities? Check these out: 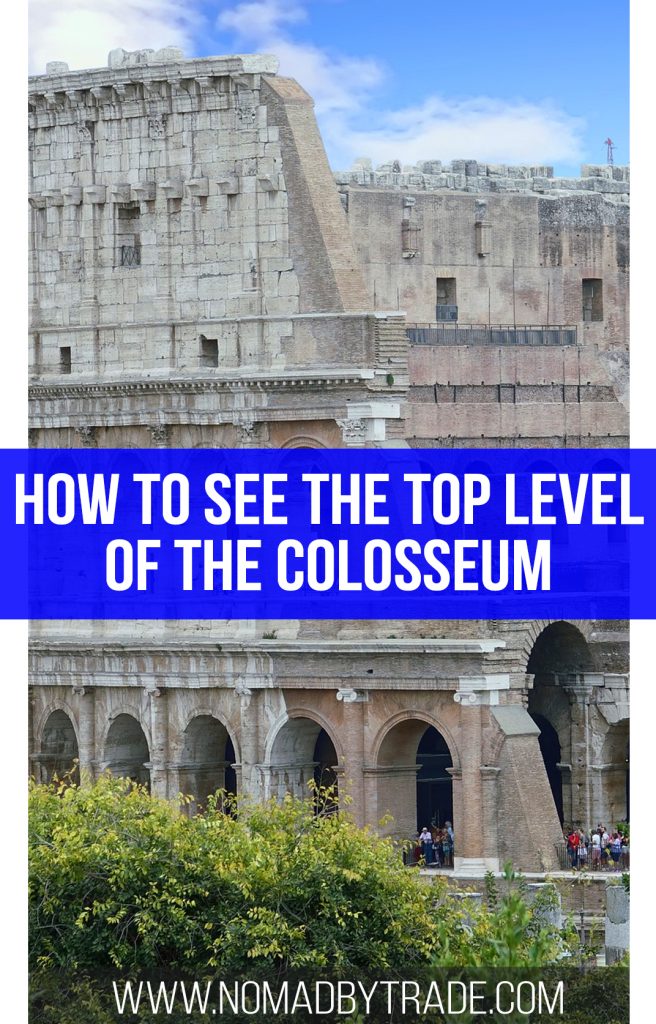 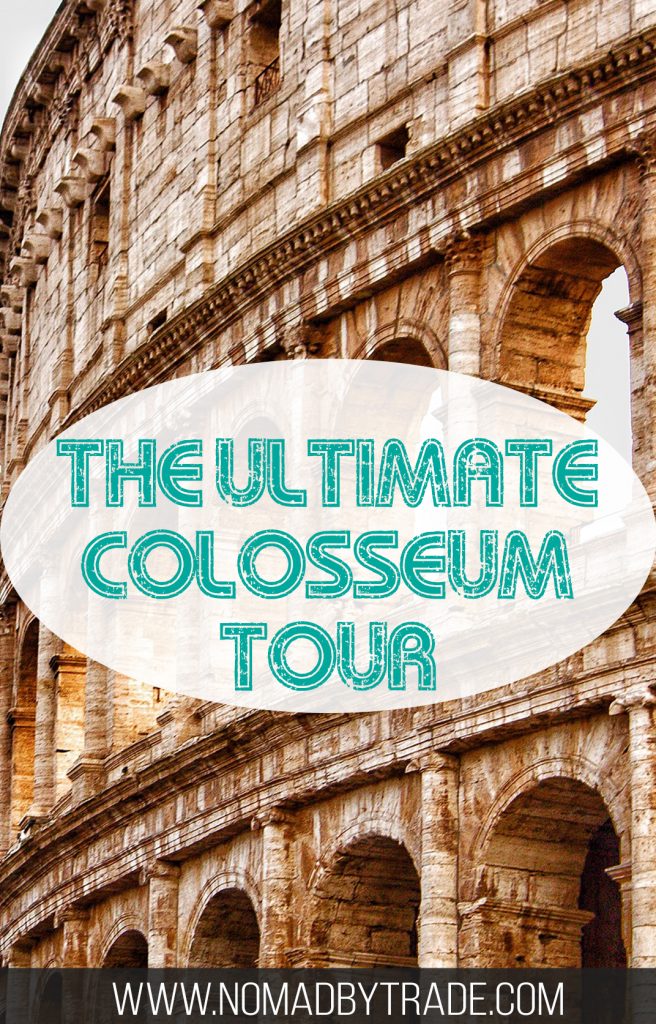