If you’re a fan of waterfalls, Thacher State Park might be a perfect escape in the New York capital region. Located about half an hour west of Albany, it’s a great spot to visit if you find yourself in the area. It’s an easy drive, and at only $6/vehicle for a day pass, it’s an affordable place to explore.

I visited in the evening after work, so I didn’t have time to explore the whole park. Even though I only had a couple of hours before dark, playing in nature beats sitting in a hotel room watching bad tv reruns any day. Based on recommendations from some of the locals I was working with, I focused on the Indian Ladder trail. It’s a relatively easy hike that can be completed in less than an hour if you don’t spend too much time enjoying the scenery. From end to end, the trail is about half a mile. There are two trail heads that lead you down from the top of a rocky escarpment – there are a few flights of stairs involved, but once you get down to the trail, it’s an easy walk. The path winds its way along the base of the cliffs toward two strikingly similar waterfalls. The rock walls themselves are stunning, as the annual freezing and thawing cycle causes huge chunks of them to erode in mesmerizing patterns. In fact, the trail is closed for a period during the spring thaw to protect hikers from falling rocks. One of the informational signs had a picture of the rockfall in 1994 that dropped 50 tons of rock.

I began my hike at the trail head by the visitor center, so the first point of interest that I came across was a slot cave entrance. The same freezing and thawing processes that cause chunks of rock to break off from the cliffs carved out these narrow slots. Another local told me that back in the old days, there used to be a different trail that took you into some caves, but I’m not sure if she meant these or other caves. 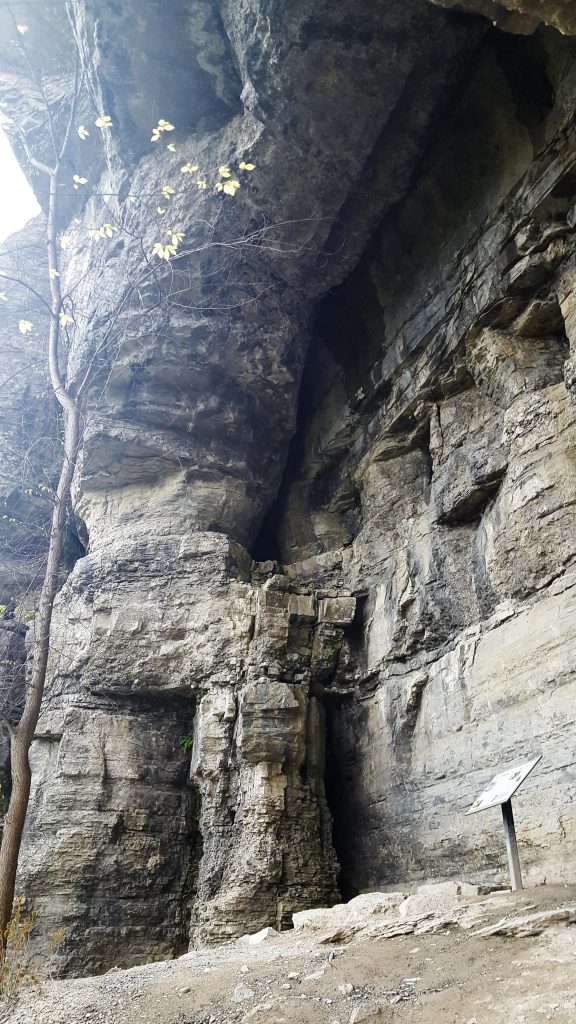 Shortly after the slot cave entrance, the path passes an underground stream that emerges from under the cliff. The first waterfall you approach is called Outlet Falls. It’s a thin stream that tumbles down from high above and crashes into piles of fallen rock. The path winds around the cliff below it and you get to pass behind it giving you a unique view that you don’t often see – the backside of a waterfall. I’m told that the best time to visit this trail is during the spring or after a lot of rain because the streams don’t flow very much otherwise. A little further down the path, you’ll find Minelot Falls. Like Outlet Falls, it cascades down from the escarpment above and offers the opportunity to walk around behind it. There’s a lot more space behind this waterfall than there is behind Outlet Falls. It’s a great spot to enjoy the view of the tumbling water with the valley below as a backdrop. 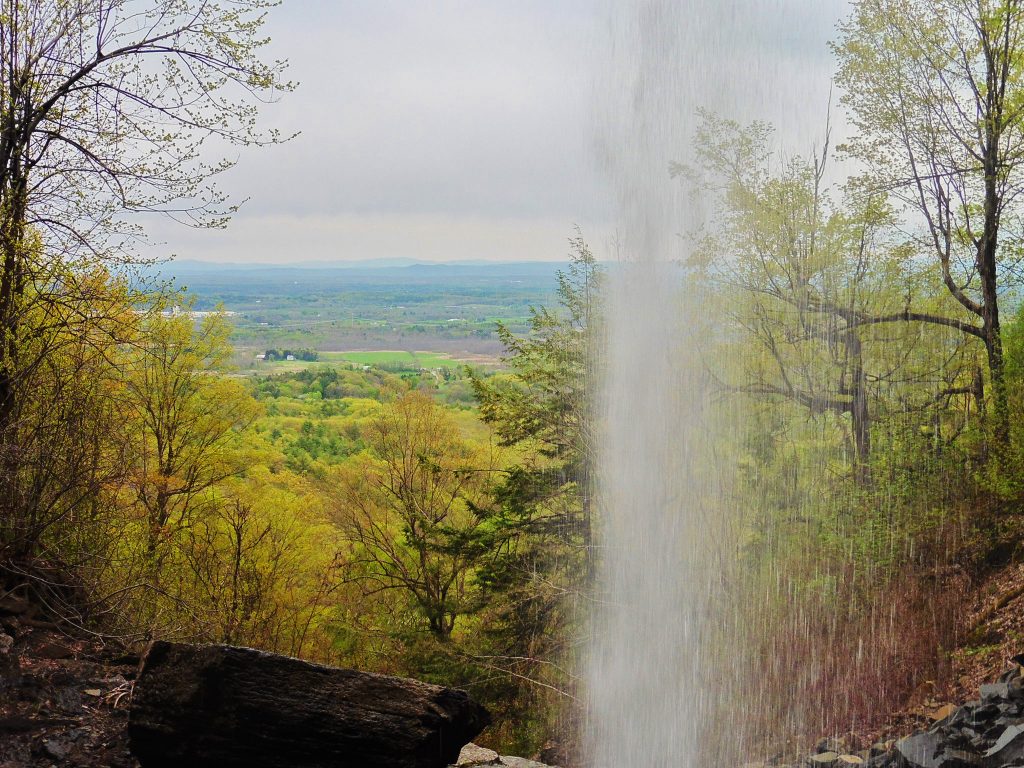 Looking out over the valley from behind the waterfall

The rocks are slippery and loose, but you can get pretty close to the chute of water from behind. I stuck my hand underneath it and caught a few drops. There were a couple people there taking pictures when I arrived, but they left shortly after and I was lucky enough to have the whole waterfall to myself. I liked this one better out of the two, so I spent some time taking a bunch of photos of my own. 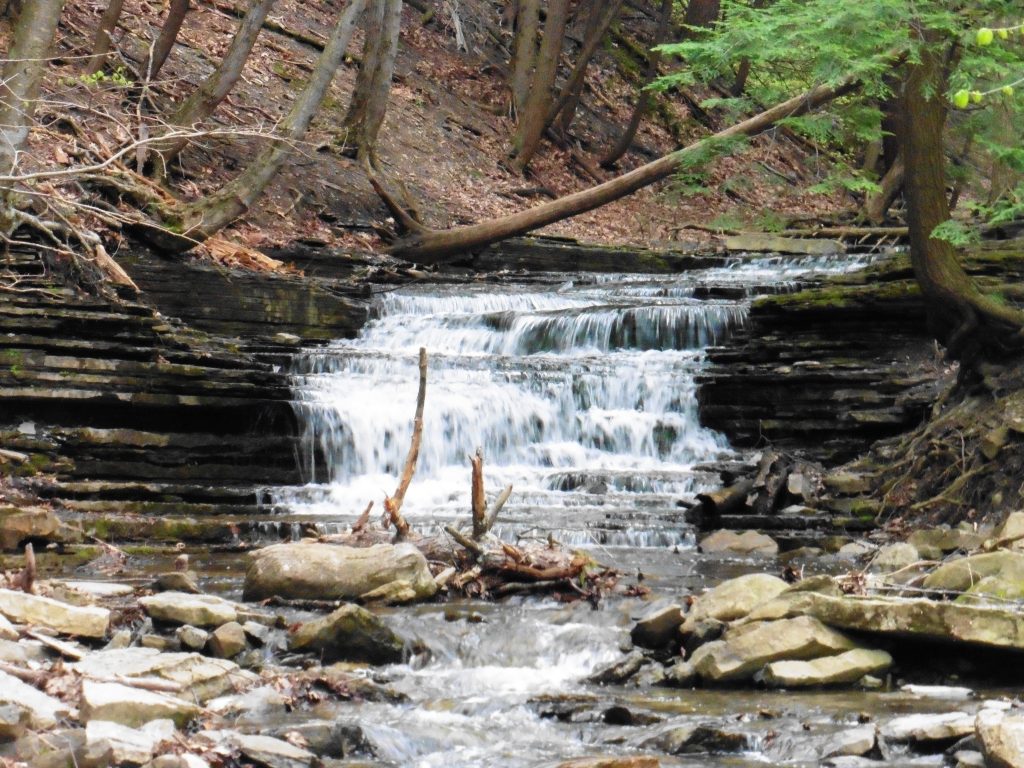 After that, I retraced my steps and made my way back up the cliff to my car. On the way out of the park, I spotted another little waterfall near the Paint Mine picnic area, so I pulled off to check that one out. It was a pretty little tiered cascade with a stream tumbling over layers of limestone.

I started out on one side of the creek, but I realized that the other side had a better vantage point for pictures. Did I walk the 100 feet back to the bridge to cross? Of course not, like the Oregon Trail-playing ’90s kid that I am, I found a spot with a lot of rocks and forded it. What are some of your favorite lesser-known parks?

Want to read more Evening Tourist adventures? Check out these other posts.