I love spontaneous adventures. So, when my boyfriend mentioned that he’d never seen Tahquamenon Falls when we were packing up to leave St. Ignace, I immediately suggested that we stop there before heading home. Sure, it was a couple hours in the opposite direction from where we needed to go, but we had all day to kill and it had been a long time since I’d been there too.

What’s generally referred to as Tahquamenon Falls is actually a series of waterfalls on the Tahquamenon River. The larger Upper Falls is more spectacular and is one of the most well-known spots in the state. The Lower Falls area consists of multiple smaller cascades that require some more effort to view, but offer a chance to play in the water a bit. We started off at the Upper Falls on the theory that if we only had time for one, we might as well see the big show. We made the mistake of just searching for Tahquamenon Falls State Park on our GPS, and it calculated the drive time to the closest edge of the park, not the actual location of the falls. Actually getting to Upper Falls took about an extra half hour on top of what we had planned, but those things happen when you make sudden decisions to wander the wilderness.

I come from a family of campers and nature-lovers, so I’ve spent a lot of time in various state parks over the years, and I think the area around the Upper Falls is one of the nicest areas on state land. There’s a brewery and restaurant located a short walk from the overlooks so you can relax with a solid meal after enjoying nature. It’s a nice amenity that I haven’t found at any of the other state parks I’ve visited over the years.

The Upper Falls overlook is relatively close to the parking area, and you can follow an easy, paved path with occasional glimpses of the falls peeking through the trees along the way. There were plenty of strollers and ECVs in sight, so it’s fairly easily accessible. We quite enjoyed the walk because the day we visited, there were multiple golden retriever puppies accompanying their owners. We may or may not have jokingly plotted to dognap all of them.

The water has a slight brownish tinge due to tannin in it. I think it gives the falls a nice, woodsy feel, although the water seemed less tinted this time around than I remembered.

A wooden staircase will take you right down to the brink of the falls for an up-close view that is not to be missed. My dad tells stories about being able to walk on a path behind the water when he was a kid, but those days are long since gone (Extensive googling has not confirmed that this was actually a thing). The falls are accessible year-round, and each season brings unique beauty to them. I’ve only visited in summer and winter, but I’d love to make it back during the fall to see the beautiful colors. On a family trip many years ago, we got to see them frozen over and it was amazing. On that trip, my mom chose not to climb down the stairs and waited at the top with my then-toddler brother. She was looking around for somewhere to sit while my dad took my other brother and I down to the viewing deck, but couldn’t find any benches. She finally spotted a board poking out of the snow that she thought was some kind of edging around the pavement. It wasn’t until she was sitting on it that she realized she’d found a bench after all. It was just buried in enough snow that only the top few inches were visible. The moral of the story is to not let even several feet of snow deter you from visiting because the falls will still be there waiting to amaze adventurers who are willing to make the trek.

We decided that we had time to see the Lower Falls, so we hopped back in the car again. There’s a trail between the two areas, but with limited time, we couldn’t enjoy the hike.

The best way to explore the Lower Falls area is to rent a rowboat to get to the island in the center. It’s possible to walk across the river in shallower areas when water levels are normal, but this should be done carefully as the current is strong in many places and the rocks beneath the surface are slippery. 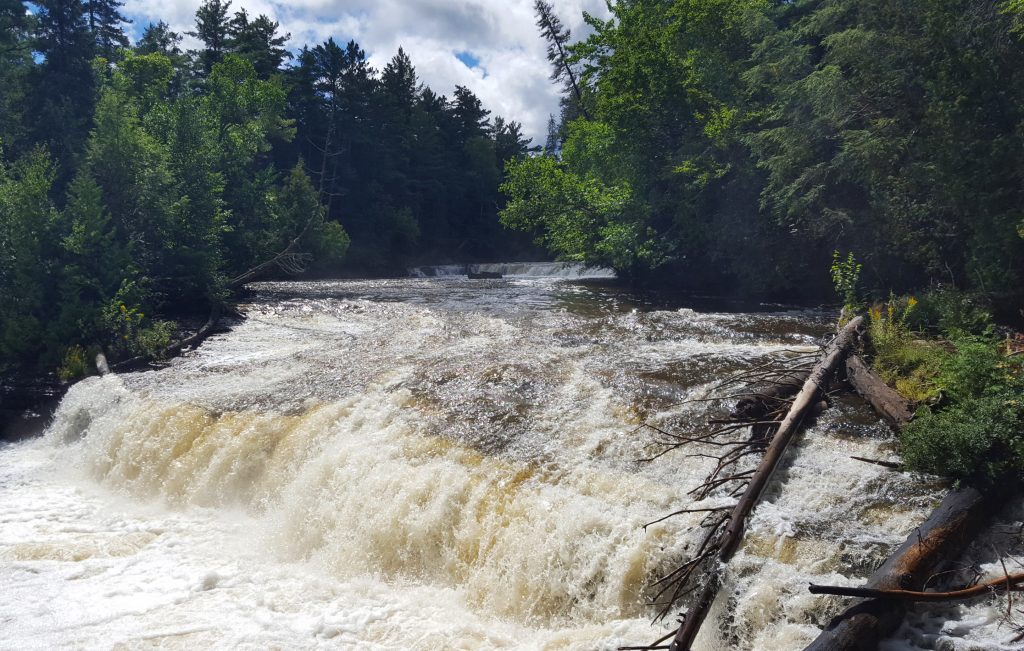 We skipped the rowboat and decided to just walk a little way up the trail. I wanted to find a spot to do some wading, so we kept going until we found a place that offered easy access to the river and wasn’t too close to the closest cascade downstream.

The current was pretty fast where we were and I was pretty sure it would knock me down if I tried to cross at that spot, so I didn’t venture too far into the river. I waded upstream a little bit until I got to an area that was a little too deep for me to venture into and still keep my shorts dry, so I turned back.

After unsuccessfully trying to do cake and candles for my birthday the night before thanks to a windstorm at the campground, I wanted to try once more. I had brought some Hostess cupcakes and candles from the car, so we made a second attempt at a birthday “cake.” We got the candles to light for a few seconds before the breeze blew them out and decided that it was good enough. 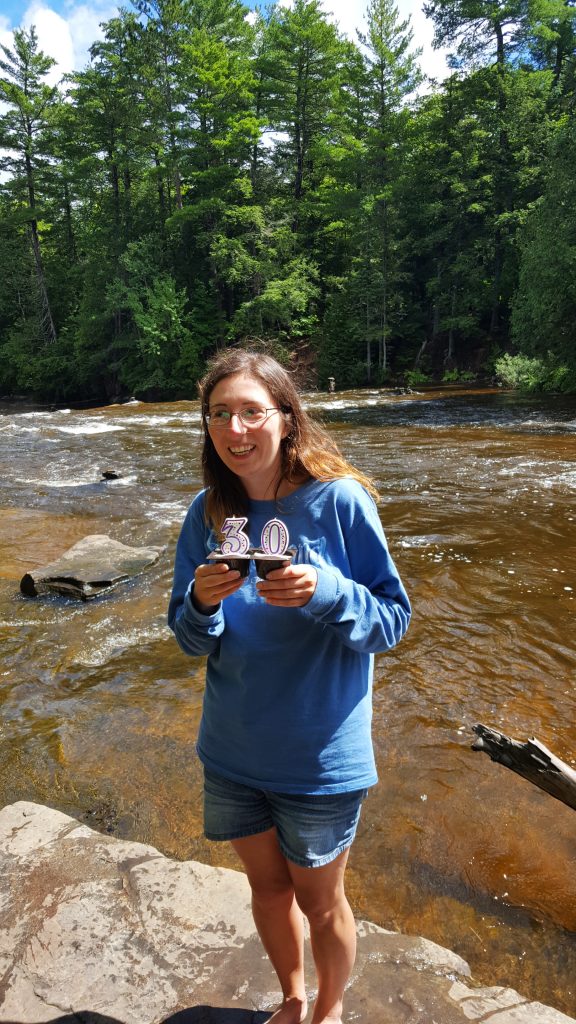 Once our cupcakes were gone, we put our shoes back on and headed back to the car for what was now a much longer drive home than we had planned on having. This was definitely a worthwhile detour, and like so many brief visits to places, it left me wanting to plan another trip to take in even more of the sights. Find out more things to do at Tahquamenon Falls here. 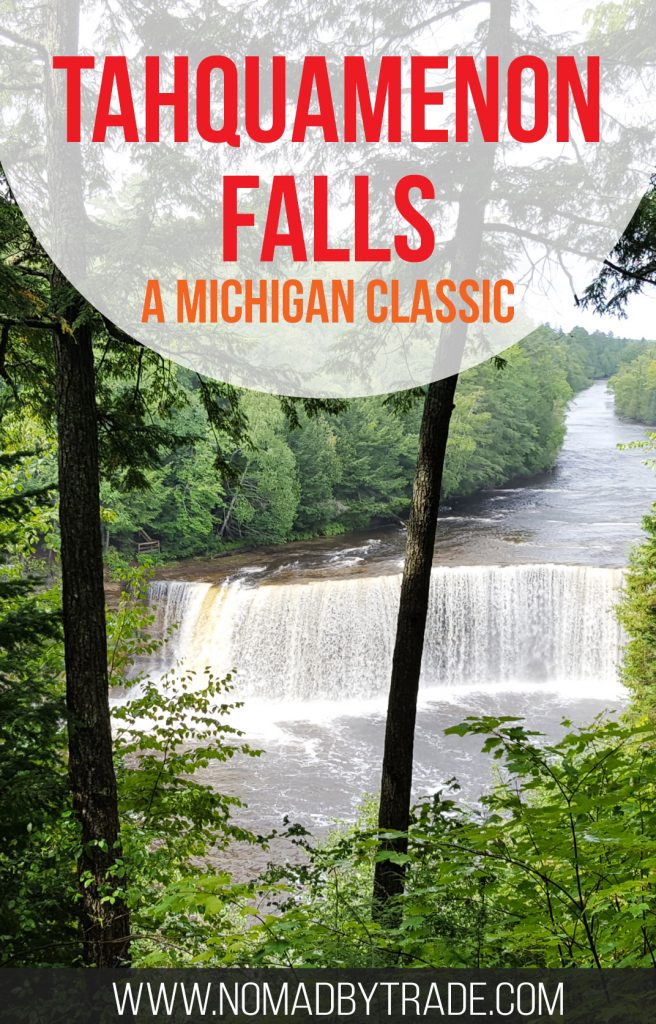