Mackinac Island is a little island in Lake Huron between Michigan’s Upper and Lower Peninsulas. No cars (except emergency vehicles) are allowed on the island, and it gives it a charming, old-fashioned atmosphere. Fun fact: it was the US’ second National Park, after Yellowstone, though it is no longer part of the National Park system. Bikes and horses are the preferred methods of transportation during the summer on Mackinac Island, so we borrowed my parents’ SUV and bike rack to haul our gear Up North (yes, that’s a proper noun in these parts) and hit the road for the weekend.

Mackinac Island lodging and hotels in the closest cities (Mackinaw City in the Lower Peninsula and St. Ignace in the Upper) are crazy expensive for summer weekends. The Holiday Inn Express in St. Ignace (I’ve found that the hotels on the UP side are slightly cheaper) was going for almost $500/night when I was trying to make reservations six months in advance. Instead, I opted to stay at Straits State Park, a gorgeous campground right at the base of the Mackinac Bridge

The weather forecast for the day was not ideal – that’s a charitable assessment – and it was supposed to start raining by lunchtime. One of the best ways to explore Mackinac Island is to ride bikes around Lake Shore Road, which goes around the circumference of the island. It’s about an 8-mile loop and can be completed in a couple of hours or stretched out to last most of the day. We decided to hit Lake Shore Road first in the hopes that we could make it back to town before the rain started. We hit some light drizzles for a few minutes at the beginning, but otherwise lucked into perfect weather. Summer weekends on Mackinac Island are normally packed, but I think the weather forecast kept a lot of people who had flexible plans away and we hardly crossed paths with anyone. In some areas, it felt like we had the island to ourselves. It was one of my favorite Mackinac Island experiences ever. If biking isn’t your thing, try exploring the island on this carriage tour.

We rode the Lake Shore Road loop counter-clockwise from downtown so we could make sure we got to visit Arch Rock, one of the top sights on Mackinac Island, before it rained. We parked our bikes at the bottom of the cliff and started the long climb up the wooden stairs to the top. If you’re not up to the climb, you can bike through the interior of the island or take a horse-drawn carriage to the overlook at the top. Pro tip: stopping to “take pictures” on some of the scenic landings is a great way to catch your breath on the stairs to Arch Rock. 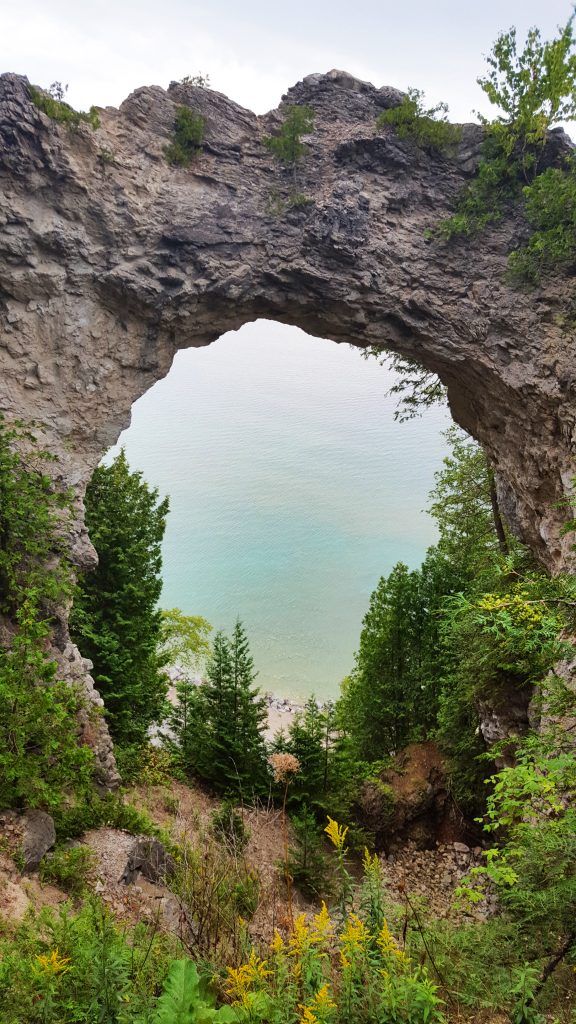 We finally made it to the top and got to enjoy the view through Arch Rock. On a sunny day, the clear blue water of Lake Huron is stunning. Even under cloud cover, it’s still pretty. Apparently tourists used to be able to walk on top of the arch, but in the interest of safety and preserving the rock formation, that’s been banned for a long time.

After taking our share of pictures, we climbed back down the stairs and continued our bike journey. We soon came across tons of little rock piles that people had built along the rocky shores – the only thing that could make the island better would be sandy beaches instead of the rocks. I don’t know when making these towers became a thing, but they were everywhere and I hadn’t seen anything like that on my last visit eight years earlier. After about a mile of passing tower after tower, we decided to try building one ourselves to see what the big deal was. Here I am posing with someone else’s tower.

We were not very good at it. We had a chance at greatness because we found a perfect, flat stone to level it off after piling a few rocks up, but I sort of cracked it in half when I put the next rock on top of it. Oops. 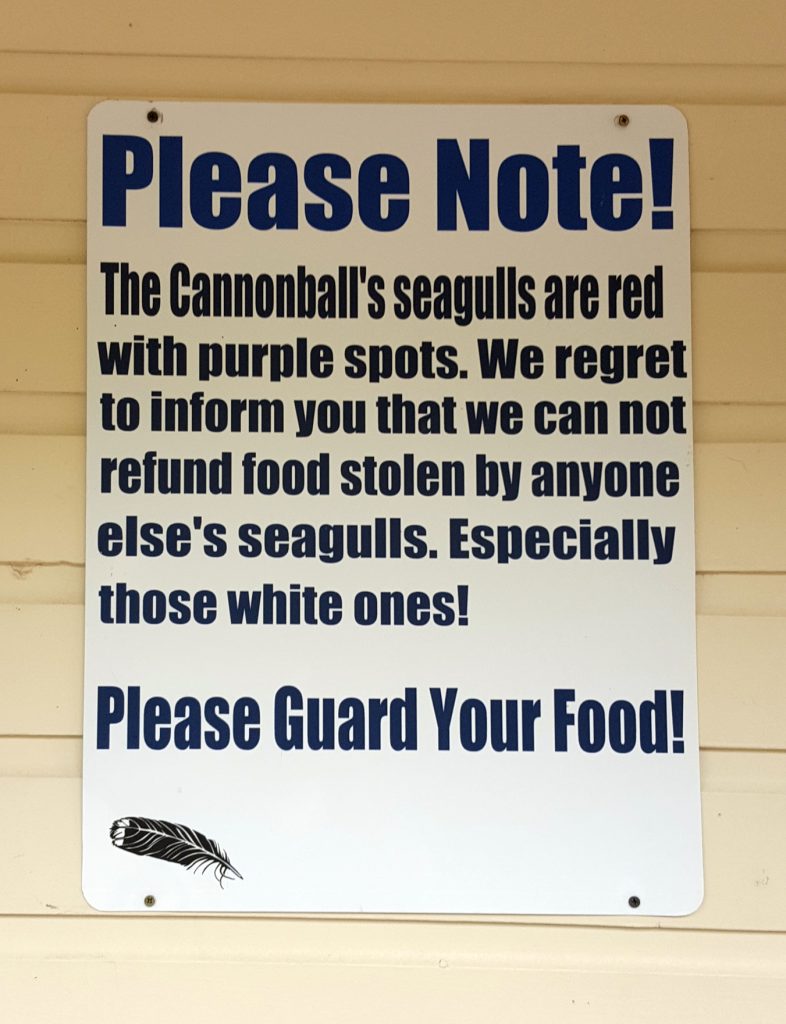 Watch out for those red and purple seagulls.

We continued on Mackinac Island bike ride and stopped for snacks at the Cannonball Inn at British Landing, the creatively named spot where British forces landed during the War of 1812. I took a picture sitting on the cannon to continue a long series of such photos dating back to my childhood. I’m happy to say that I looked significantly less awkward as an adult than I did in some of the earlier pictures. We made another stop at a deserted dock that’s evidently mainly used to load and unload the horses who work during the summer. I loved the peaceful feeling of sitting on the dock with just my boyfriend in contrast to the crowds I’ve always been used to on Mackinac Island.

We made it back to town just in time to miss the first wave of rain and rode it out during a delicious lunch. The Pink Pony is one of the best Mackinac Island restaurants and combines good food with a perfect view of the harbor. The waitress was kind enough to let me order off of the kids’ menu because I spotted a grilled peanut butter and jelly sandwich that seemed like the perfect thing to keep me from remembering that I was now a year older. It was delicious. After lunch, we headed up to Fort Mackinac. This part of the island has been fortified in some form or another since the 1700s. It never saw a ton of action, and as such was probably not a terrible place to be posted if you had to be in the army during the 1800s. You have to walk up a long, steep ramp to get to the fort and we “stopped to take some pictures” aka catch our breath halfway up. Fort Mackinac is always lively during the summer, with almost constant demonstrations of period music, weapons, marching, and battle tactics going on in the parade grounds. The uniformed performers did a great job entertaining the crowd while also teaching them about the topic of the hour.

One of my favorite things at Fort Mackinac is the periodic cannon demonstration. They use tin foil instead of actual shells in order to avoid actually harming anyone or anything in the harbor, and it’s very cool to see the number of different steps that went into firing just one round. The guys running the demo asked if anyone was celebrating something worth commemorating with a cannon blast and my boyfriend yelled out that it was my birthday, so I got a one-gun cannon salute dedicated to me. Not the worst, I guess. Of course I dressed up in the kids’ costumes.

You can also wander through many of the surrounding buildings to get a feel for what enlisted quarters, officers’ houses, the mess hall, and other areas were like back then.

Once we’d had our fill of history, it was time to fill up on fudge. For anyone with a sweet tooth like mine, this is a classic case of burying the lead…deep, deep burial. One of the best things to do on Mackinac Island is eat fudge. In fact, tourists are nicknamed “fudgies” by the locals because we tend to eat a lot of it. There’s even a Michigan ice cream brand that has a flavor named after it. I’ve had fudge at plenty of other places over the years, and even tried my hand at making some of my own, but nothing has managed to come close to the flavor and texture of Mackinac Island fudge. I don’t know what kind of magic they use to create this delicious dessert, but it’s unlike anything else.

My stated goal for the afternoon was to eat myself sick on fudge samples, so we set off to find the first shop. Most frequent visitors have a favorite fudge shop that they’ll swear by, but I’ll eat any and all options. There are several big names that have multiple shops along the main drag, but I’ve gotten my fudge fix from the little counter inside the Murray Hotel on my last couple of visits.

Its exterior doesn’t scream “FUDGE” like most of the other shops do, but I like the  fudge at the Murray Hotel on Mackinac Island because they have wacky flavors that you don’t get in some of the other shops. They have a little counter in the front of the hotel lobby that is easy to miss if you’re not looking for it. I went for s’mores, Butterfinger, cookie dough, and classic cookies and cream flavors this time around. They also had offerings like orange creamsicle, caramel apple pie, something blueberry, and tiger fudge in addition to the classics that you can get anywhere. Out of my four fudge flavors, I ended up liking the s’mores best.

With our fudge in tow, we wandered through some of the rest of the shops downtown browsing for souvenirs we didn’t really need and a Christmas ornament that I wanted since collecting them during my travels has become a habit for me.

Check out other things to do on Mackinac Island here!

While we were shopping, an absolute downpour started. It’s been a long time since I saw rain that hard anywhere other than Florida. We hunkered down under an overhang outside one of the shops and tried to wait it out. The Mackinac Island drain system was quickly overwhelmed, with rivers of water rolling down the paved streets heading up the hill behind town adding to the mess. Within minutes, the street in front of us was turned into a gross dirt and manure soup that was at least ankle deep. 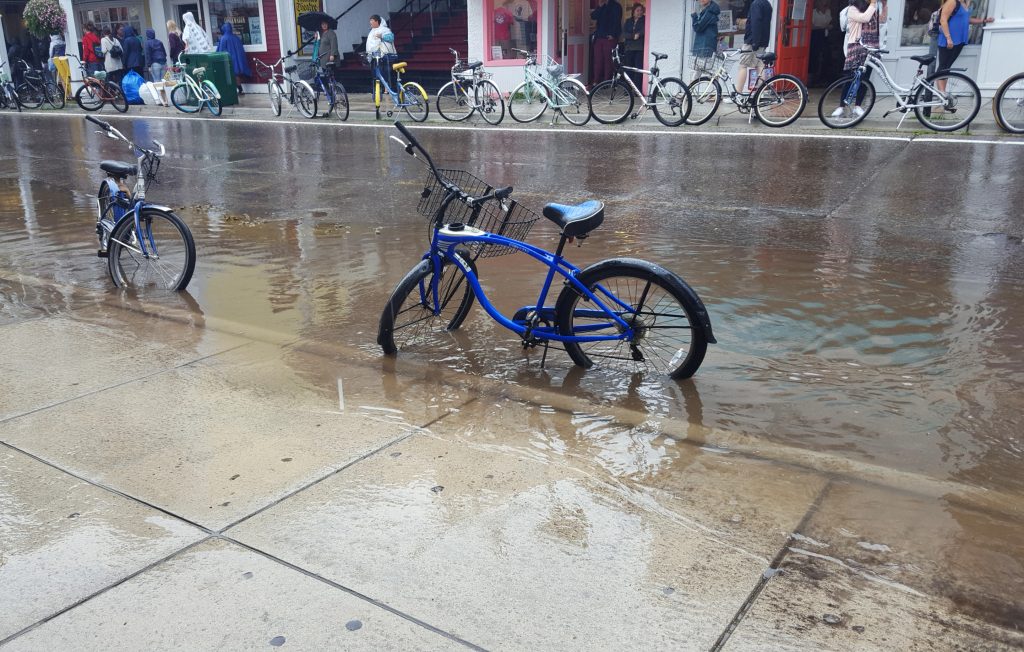 This is not the kind of puddle you want to jump in.

There was a horse-drawn carriage trying to turn onto the street heading up the hill in front of us with what appeared to be a very unlucky load of wedding guests. The driver cut the turn too sharply and clipped a pole on the sidewalk. It evidently damaged the cart because crew members (what does one call the staff that operates horse buggies?) had to flag down another empty carriage passing by and the group of people in suits and fancy dresses had to transfer to it amid the torrential rain, with the women carrying their shoes and holding their dresses up as they ran through the water. 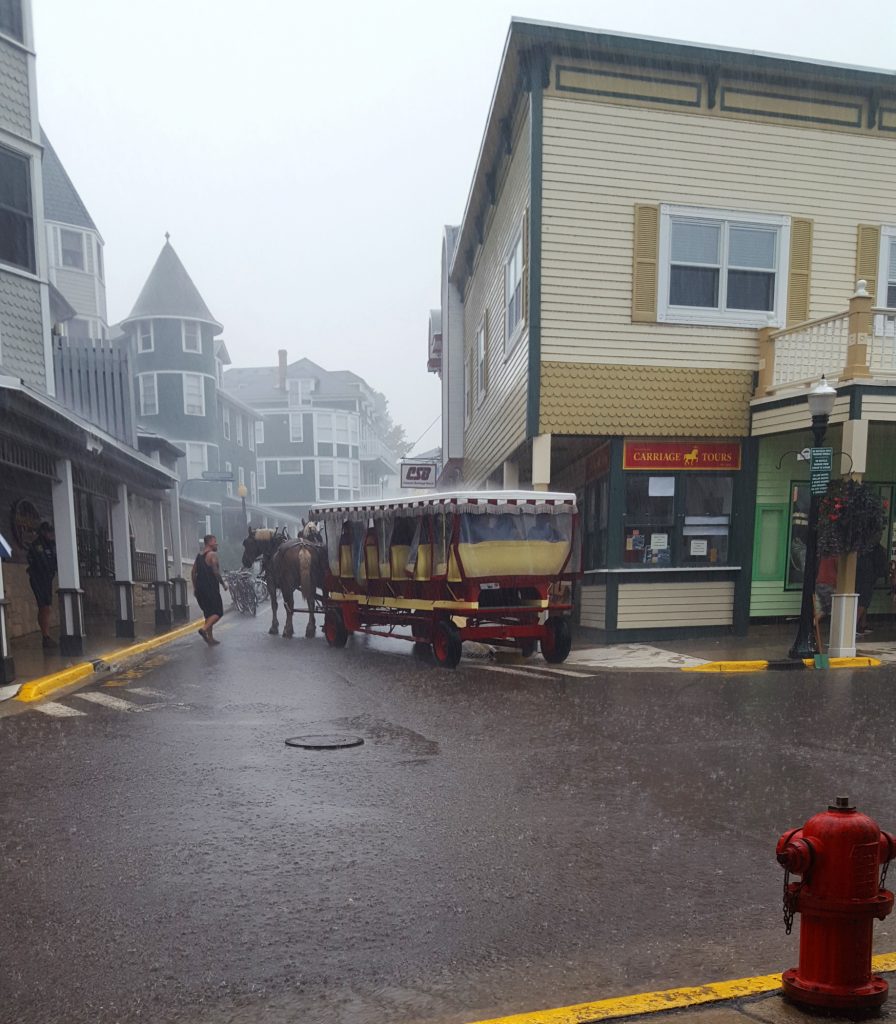 Like most summer thunderstorms, it blew through fairly quickly and we were soon able to resume walking between the stores through a light drizzle that lingered. We found a new café that had recently opened and had some pre-dinner desserts before deciding to catch the next ferry back to St. Ignace. We were cold and damp and ruled out getting a chance to explore any of the rock formations in the interior of the island.

If you’re interested in exploring Mackinac this summer, book soon! It’s one of the most popular tourist attractions in Michigan and hotels fill up early, especially for summer weekends.

Have you visited Mackinac Island before? What is your favorite part?