An Evening in San Antonio After spending a week in the much smaller border town of Laredo, I got to have one whirlwind night in San Antonio. It was exactly the kind of Evening Tourist adventure that I specialize in. We made the drive up after work on a Thursday inght so we could catch a direct flight home first thing in the morning. We didn’t leave Laredo until almost six, so by the time we got to San Antonio, it was getting close to nine.  Even with our late arrival, I still got to have a great evening in town. Read more about the fun things you can do in San Antonio after work.

After checking into the hotel, our first stop was a nearby Mexican restaurant/bakery that I had read about. After three days of authentic Mexican food in Laredo, Mi Tierra felt like a return to the cheesy (both atmosphere and food) Tex-Mex I’d grown up with. The décor was close to being over the top, but things like that amuse me so I kind of loved it. 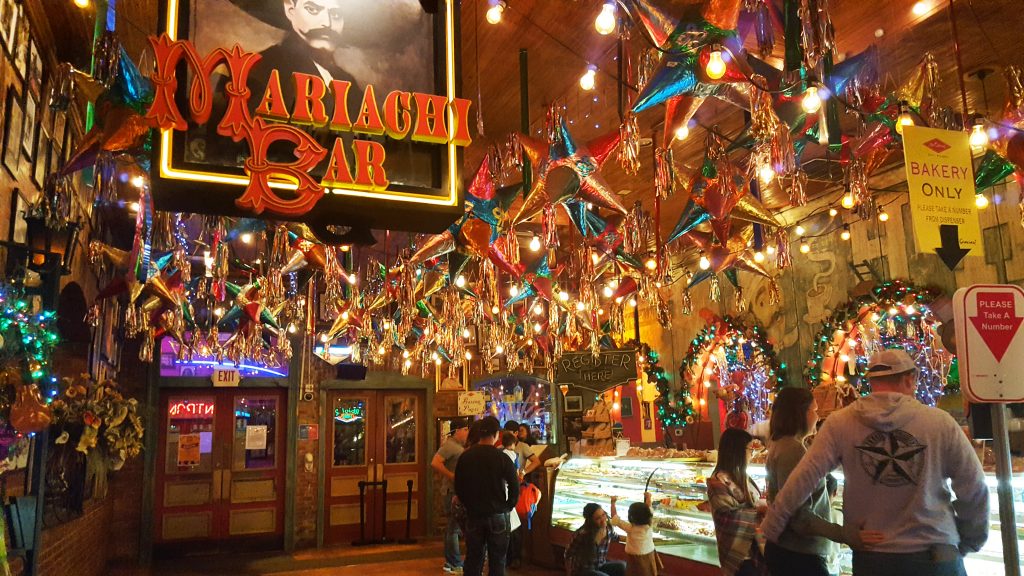 I really enjoyed the tacos we’d been eating all over Laredo, but I did miss having everything slathered with melted cheese, so I was very much looking forward to this meal. I got a sampler platter so I could try a bit of everything. The chicken was some of the best I’ve ever had in Mexican food, though I would pass on the chili if I had another shot. The place is open 24 hours a day, though, and it was hopping even late at night. Plus, they have a killer bakery window.

Our next stop was the Alamo. I grew up watching those old Disney Davy Crockett movies, so I’ve always had this weird fascination with the Alamo, but I’d never been anywhere other than Amarillo in Texas before. We circled around for a really long time in search of parking, and finally my co-worker offered to just drop me off and wait with the car while I ran and snapped a few pictures. I took him up on his offer and hustled over to see the famous fort all lit up at night. The Fort was closed and it was almost 10 pm, but there were still plenty of tourists milling around in front of it and a small crew filming an intro to some kind of video. I was borderline giddy and briefly contemplated the consequences of “missing” my flight the next morning and coming back to actually get to go inside. (Don’t worry, I dutifully boarded my plane as scheduled the next day.) 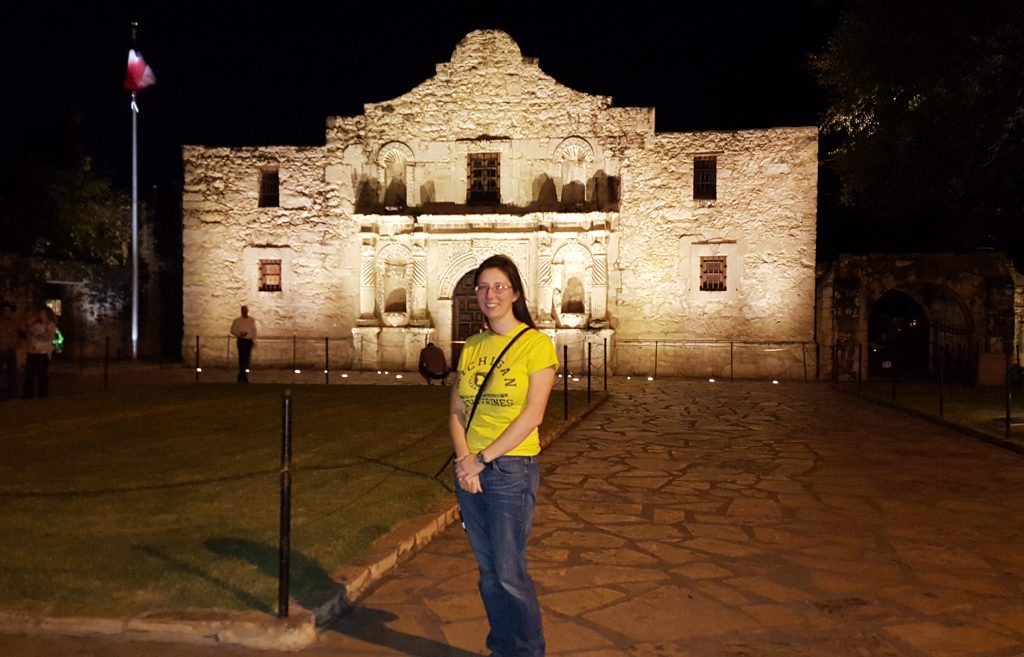 I read some of the plaques and asked a fellow visitor to take a picture of me standing in the same spot my dad posed on when he visited during the ‘60s. Spartan fans may disagree, but I believe that I was a bit better dressed than he was back then.

I offered to swap out with my co-worker so he could go take a look, but he wasn’t interested and we just went back to the hotel. I wanted to see the Riverwalk area I’d read about though, so I ventured back out on my own. It was about 10:30 on a Thursday night and I was surprised to find the area I went to fairly deserted. I found metered parking pretty easily and entered at the far end. 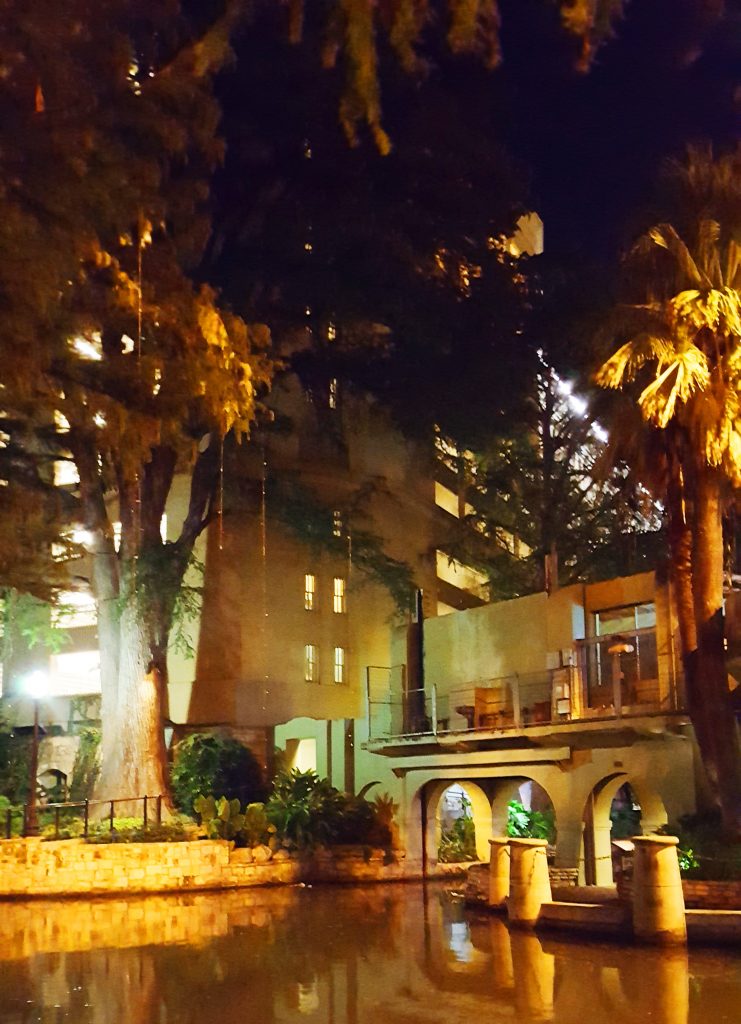 This looks like it belongs in the Pirates of the Caribbean rides.

I passed a few couples in fancy outfits coming up the stairs, but other than that I was completely alone. I wasn’t entirely comfortable as I’d expected there to be more people out and about. I think if I had found parking closer to the heart of it I would’ve found a livelier area, but I didn’t stick around too long. Despite the unease that comes from being a woman alone at night in a deserted area of an unfamiliar city, I did kind of like the moody and mysterious atmosphere.

Like so many of my business trips, I got a little taste of the city, but still need to go back to actually experience all it has to offer. I’d love to take a real trip so I’m not limited to just the things you can do in San Antonio after work. 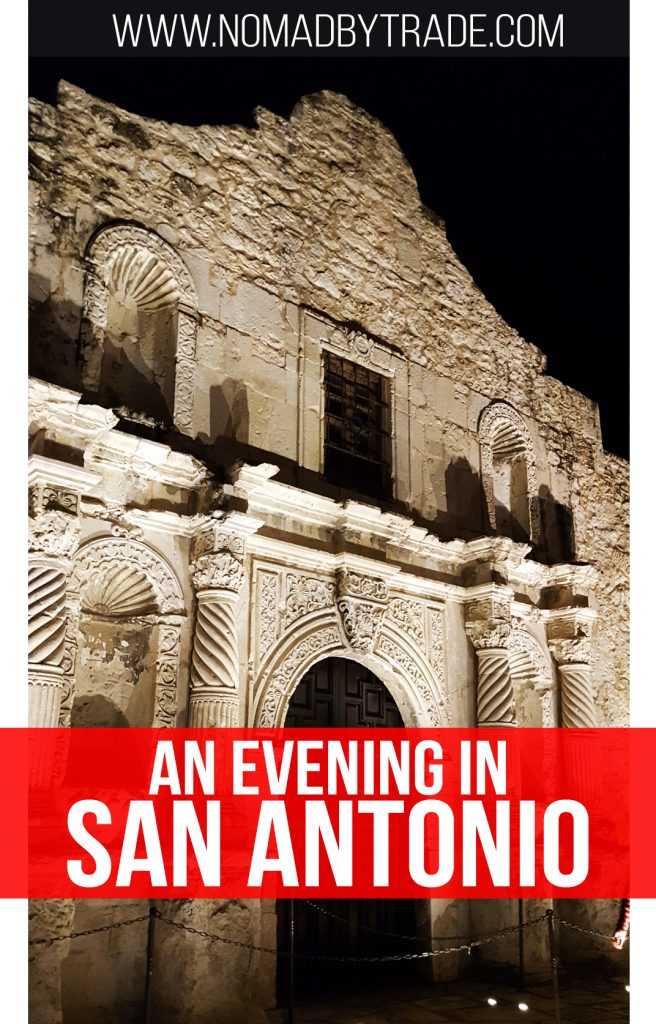 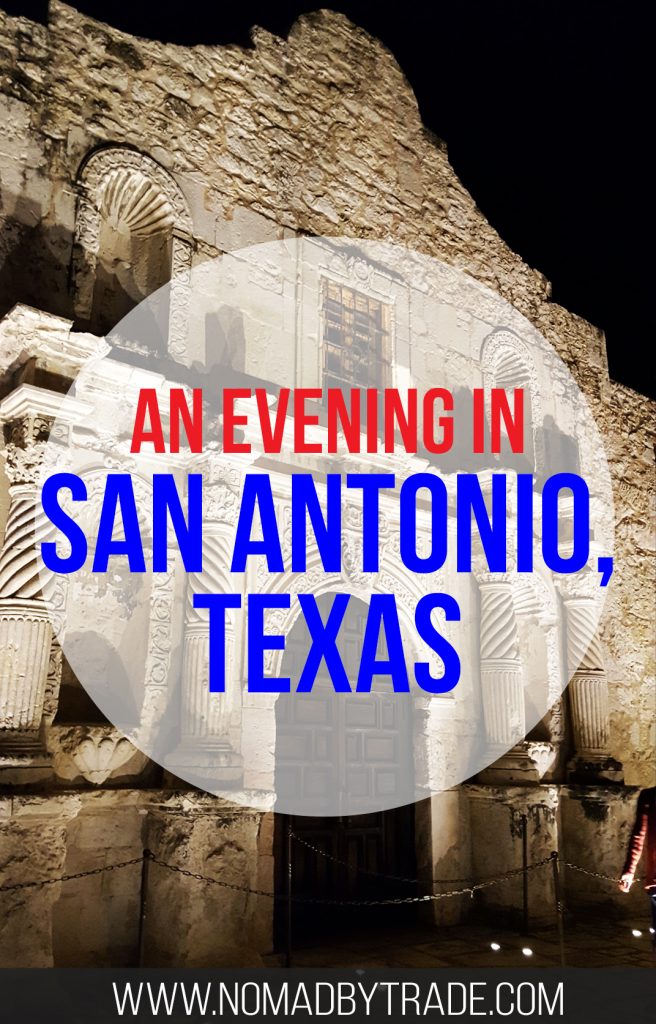