Review of Residence Maximus: An Affordable Rome Hotel with a View When planning my trip to Rome, I knew I wanted a hotel close to the Colosseum. I’d been dreaming of seeing this ancient wonder for years, so I was determined to make the most of it. The only problem was that most Rome hotels with a view – especially hotels with a view of the Colosseum tend to be a little bit pricy. Thankfully, I found Residence Maximus, which turned out to be the perfect combination of affordability and proximity to attractions and transportation. This was not a sponsored stay and I paid for my own accommodations, so you know all opinions are my own. Residence Maximus operates apartment-style rooms in a few buildings near the Colosseum. I was lucky enough to have a room in their main building – across the street from the Colosseum, and also where their office is located. If you’re looking for Rome hotels with a view that won’t break the bank, try booking a Colosseum-view room here. I arrived on a bus that dropped off at the main Colosseum bus stop and only had to walk a block and a half to get to the building.

I’d been provided with detailed instructions for checking in via email a few days before my arrival. The building the front desk (and, it turned out, my room) was located in has other residences and offices. My only complaint was that with all of the instructions for getting to the building, there was no mention of which buzzer I was supposed to ring to be let in. I agonized for a minute – of course none of them just said “Residence Maximus” – before realizing that the door was actually unlocked. Once I entered the lobby though, I realized that there was no signage directing me to the check-in desk. There were four doors and I of course picked the wrong one. Someone walking through the lobby took pity on me after a minute and pointed me in the right direction.

I was quickly checked in and led to my room. I’d originally been booked in one of the off-site rooms, but by some miracle got upgraded to one in the building that looked right out at the Colosseum. I like to think it was just a well-deserved twist of fate or karma, but the cynical side of me thinks it was just because it’s probably easier to clean the rooms in that building when the place isn’t fully occupied. Regardless, I was delighted. The clerk at the front desk showed me how to open the door that led to the rooms and mentioned some of the amenities in the area, including a 24-hour grocery store right around the corner.

There are several bus lines that stop within a block, including some of the most important tourist routes. The Colosseum Metro stop is only a couple of minutes away on foot, and there are streetcars that pass right outside so you’re well connected to the rest of Rome.

My room at the Residence Maximus My room occupied two levels – the bed and sitting area were on the first floor and the bathroom and another sitting area were in the basement. It was studio style, but with the second level downstairs, it was huge by European hotel standards. I had a big, comfy bed all to myself – one of the benefits of traveling solo – and there were a couple of armchairs to hang out in.

My windows overlooked the Colosseum in all of its ancient glory. I celebrated my last night in Rome with a bottle of wine gazing out at the view. Sure, there were some power lines in the way, but for 217 euros for a two-night stay, I wasn’t going to complain. What a way to end a whirlwind couple of days in Rome.

Downstairs, there were a couple of chairs and a table in the basement sitting area. It was pretty noisy down there though, and I much preferred relaxing on the furniture upstairs. There’s some kind of uncovered vent to the outside that lets in all the ambient street noise, so it’s not particularly peaceful. There was also a mini-fridge (a luxury I haven’t had anywhere else in Europe so far) and a bunch of glasses ranging from coffee cups to wine glasses. Some of the apartments offered by Residence Maximus have more cooking facilities, but the coffee maker here was more than enough for me. The bathroom was also located in the basement and was fairly spacious. There was a nicely-tiled shower and decent shampoo and soaps to pick from as well as the towel warmers I love so much in European bathrooms. 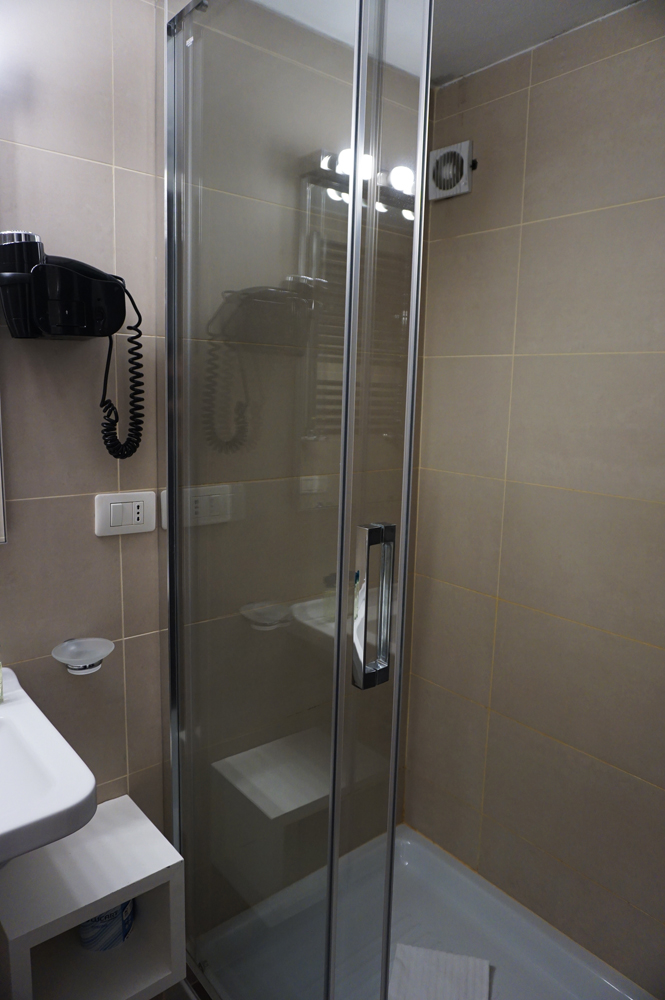 Other info for staying at the Residence Maximus

You’ll definitely want to check your email prior to arriving to get check-in directions. Depending on which room you book, you may or may not be checking in at the same address you’re staying. It would be disappointing to haul your luggage to the wrong building to start with.

The Residence Maximus offers luggage storage for before and after your stay. Because their front desk isn’t staffed 24/7, you’ll have to time your pick-up and drop-off to make sure someone is in the office. There is an emergency number to call if you need assistance during your stay on the off-hours.

You can make reservations on Booking.com.

The Residence Maximus might not be for you if:

Now that you’ve got your Rome hotel booked, check out some of the great things to do there:

Don’t forget to save this post about this great Rome hotel with a view for later on Pinterest!