5 Things that Surprised Me in Las Vegas Las Vegas never really seemed like my kind of place, but I’ve always been curious about it because it also kind of seems like somewhere everyone should try to see at least once in their lives. Due to a last-minute booking for a recent work trip, I ended up with a six-hour layover there, and since LAS is right next to the Strip (I’m not joking – it’s basically across the street from the Luxor and Mandalay Bay.), I decided that it was the perfect opportunity to get a taste of the town. Plus, I got to check off Nevada (hey, #45) on my list of states that I’ve visited. Here are five things that I learned in my four hours in Las Vegas. The casinos don’t have airport shuttles.

There wasn’t a lot of planning involved in this expedition, so I was unaware that the casinos and hotels don’t have their own shuttle services. I had planned on just hopping on the first one I found, but that plan was quickly scrapped. I inquired at the info desk by baggage claim, and the lady there suggested buying a ticket for the airport shuttle that supposedly departed every fifteen minutes. It was only $8 one way (I couldn’t get a round trip ticket because the pick-ups at other locations have to be scheduled 24 hours in advance.), and I was told it would take me to the Wynn, so I went for it. Well, half an hour later, we were still parked in the ground transportation area. Then I ended up being the 5th of 6 stops. I almost got off when the first stop was the Venetian since it’s so close, but the bus driver assured me he was going to the Wynn soon. We had different definitions of “soon.” He also slammed on his brakes for no reason at one point, throwing everyone in the bus forward. I was in the front row with nothing to catch myself on and wound up with a pretty good bruise on my arm from where I collided with a metal wheelchair loading apparatus. Finally, an hour after originally boarding, I was dropped off at the Wynn. A taxi would’ve cost me at least double, but if you’re in a hurry, just spend the money. I recently upgraded to a new mirrorless camera in preparation for my big vacation, and Las Vegas was the perfect place to play with all of its settings. I had beautiful weather, and spent most of my time just wandering around the Strip taking pictures of the casinos and their various gimmicks. I tested out the slower shutter settings on the fountains to catch the flow of the water. I put it in sports mode to catch the flamingos in the Flamingo’s habitat. It was great. And most of the casinos look gorgeous through the lens of any old camera. Vegas is all about the show, of course. I didn’t get to see the Strip at night, but I can only imagine how much fun I would’ve had trying to capture it all lit up.

It’s way better for families than I imagined.

I always had an image of Las Vegas as just a row of casinos where adults went to get drunk and gamble, but I was very wrong. I mean, not entirely – that’s definitely still a big thing, but there was a surprising amount of things for kids to do too. I wandered through a couple of the arcades, and they were buzzing with kids. I also tried to ride the roller coaster at the New York, but when I got up to the entrance, I discovered that it was closed for maintenance. I’ve been told that the Fremont Street Experience downtown is very cool as well, but that didn’t fit into my four-hour mini-vacation. It’s not that easy to walk the Strip.

Due to the desire to promote better traffic flow and prevent pedestrians from getting hit by cars (I’m assuming), there are a lot of areas where it’s hard to just walk from place to place. There were some normal crosswalks, but a lot of the intersections had bridges that you had to climb stairs or ride an escalator up to. They all had elevators as well, but it seems like it would be a nightmare to try to navigate with a wheelchair or stroller or if you had difficulty with stairs. I had to backtrack a lot to get to bridges that I had already passed because there was no other way across the street. At one point, I had to cut through a little mall because there didn’t appear to be any other way to get past it without crossing to the other side. Once I got to the Excalibur, I couldn’t find any way down to the sidewalk and had to ride a weird little train past the Luxor – where I was trying to go – to Mandalay Bay, and then catch another train from there to the Luxor. There’s a Las Vegas monorail, but it only makes a couple of stops on the Strip, so unless you’re staying at one of those spots, it’s probably only useful for venturing further into town. 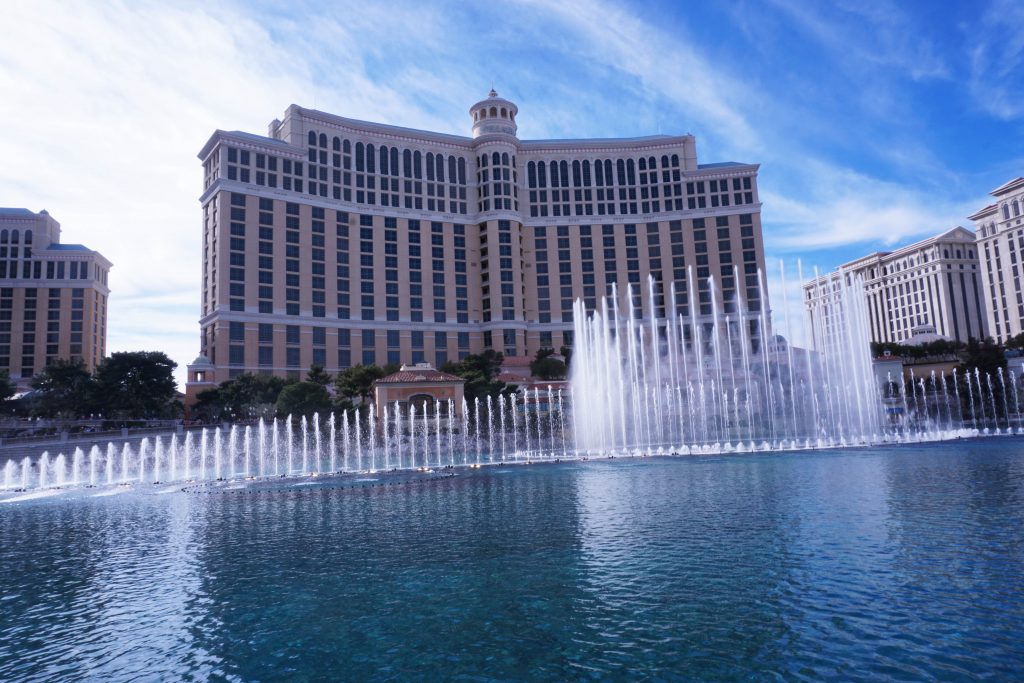 It’ll feel familiar even if it’s your first time

Just like my first visit to New York City, I found that a lot of the buildings looked very familiar because I’ve seen them in movies and TV shows. I’ve seen “Ocean’s Eleven” (the Clooney version) enough times that I could probably conduct my own heist, so it was exciting to see the Bellagio and its fountains. The Luxor looked a lot taller when contestants were sliding down the side of it on an episode of Fear Factor, but it was still instantly recognizable. Names like The Venetian and Caesars Palace just rolled off my tongue because I’ve heard of them so many times. It makes for a weird yet cool deja vu sensation that I quite enjoyed.

What surprised you on your first trip to Vegas?

If you’re looking for more tips about planning your visit, check out this guide to Las Vegas from a local.