Visit the Pre-Incan Ruins of Huaca Pucllana in Lima Note: This  post contains affiliate links, and should you choose to make a purchase, I will receive a small commission at no extra cost to you. If you use an ad blocker, you may need to disable it for this site in order to see the product images.

All visits must be as part of a guided tour. This is actually helpful because your guide will be able to give you a lot of insights into these impressive ruins in Lima. Tours are given in Spanish and English and depart regularly.

Our first stop on the tour was an excavated area where clay pots were used for religious offerings. There are a few statues of people in traditional dress to demonstrate how the ceramics would’ve been used. One of my favorite parts of the Huaca Pucllana archaeological site tour was the area where the adobe bricks had been made. I’ve seen plenty of adobe buildings before, but I never actually knew how the process of making the bricks worked. I definitely would’ve preferred to be the mud squisher if I lived back then. The complex is deceptively large, and we took a walk along the edge. The main entrance is right next to the pyramid, so as we got further away, we got an even better view of it and could appreciate its scale even more. In the far corner, there was a small agricultural area showing examples of crops that the Lima people (the culture that constructed the pyramid) would’ve grown. I was amazed by the giant corn kernels, which I’d never seen before, though we ended up getting to eat them at several meals during our trip. It was also our first encounter with llamas and alpacas in Peru, as the site had a couple of each, plus some guinea pigs to show what kinds of domesticated animals the Lima people raised. After the agricultural area, we walked across a big ceremonial plaza that provided a great photo op in front of the pyramid.

Climbing the Huaca Pucllana pyramid was pretty steep and very uneven. One of the women in our tour group was wearing tall wedge sandals and I don’t know how she made it to the top. You’ll definitely want to wear sturdy shoes. I rolled my ankle even in my sneakers by stepping on an uneven rock. The climb is worth it though – the view from the top is very cool. Apparently before all of the tall buildings were built, you would’ve been able to see all the way to the ocean from there. Nowadays, you just get a cool view of Huaca Pucllana’s Miraflores neighbors. I loved the contrast of modern buildings and homes right across from the ancient adobe pyramid. Take care if you’re visiting Huaca Pucllana with kids – there is a decent drop along one side and the rope blocking it off didn’t seem like it would do much to stop anyone from falling. I love the contrast between old and new.

The top of the pyramid was used for banquets and other ceremonies and shows evidence of benches and a roof. We also walked by a spot where the Wari culture, who existed after the Limas, had buried mummies. 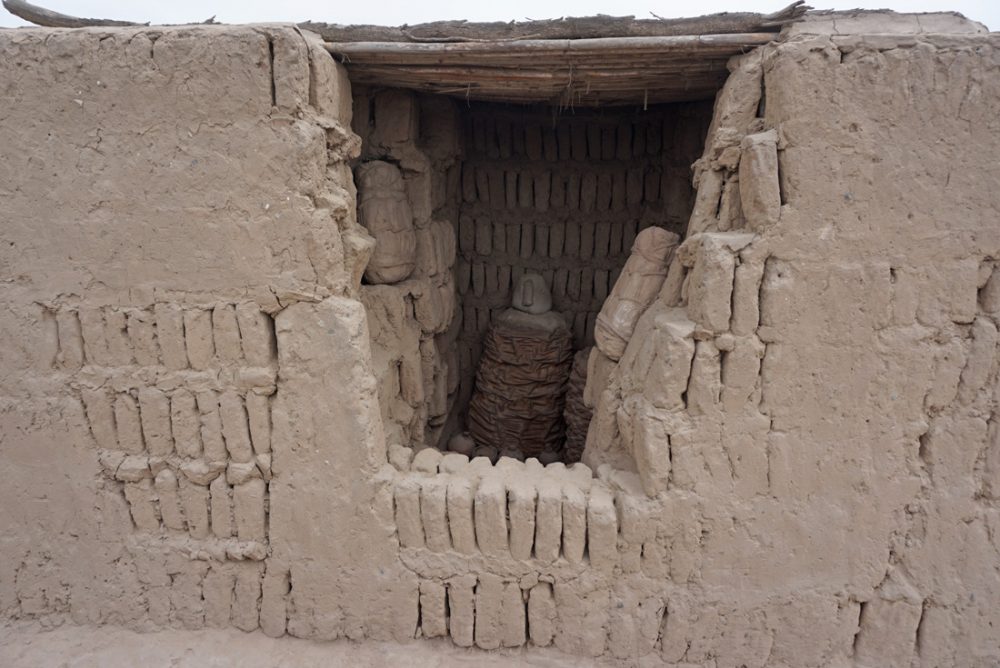 Once our visit to the top of the Huaca Pucllana pyramid was complete, we headed back down a different pathway. This one consisted of several switchbacks working their way down the side of the pyramid, so again, watch your step.

There is a small (and by small, I mean one room) museum on site at the entrance/exit. It only takes a few minutes to walk through, but it contains some of the artifacts from the Huaca Pucllana archaeological site. The main showpiece is the giant ceramic pot with a painting of a shark on it. I particularly enjoyed the fact that a dad there was singing the Baby Shark song that I’m told plagues the parents of toddlers right now to his kid. It’s nice to see that some things are universal. 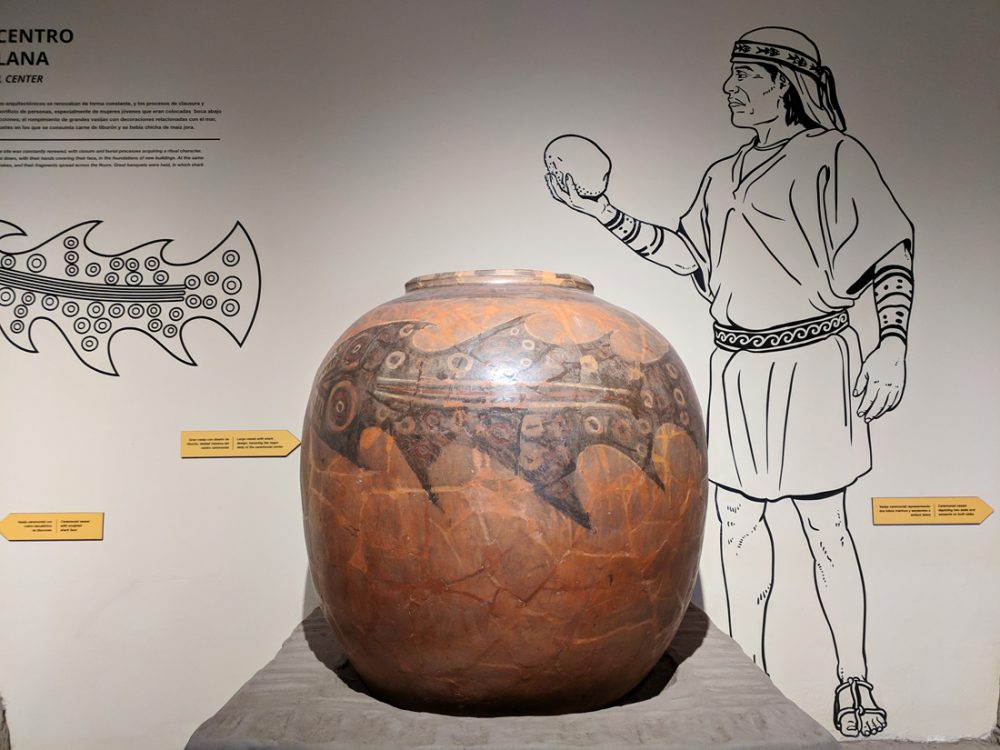 The area also has a small gift shop and an area with some cultural information. The day we were there, there was a rescue operation devoted to Peruvian hairless dogs with a couple of their animals on site for people to see.

If you’re hungry after your pyramid climb, you can grab a meal at the Huaca Pucllana Restaurant right at the pyramid. It has the kind of menu that foodies dream of, and is a great place to taste some Peruvian cuisine. Or, if you’re in the mood for something else, there are plenty of other options. You can find the Huaca Pucllana Restaurant menu on their official site.

How to get to Huaca Pucllana

You can visit Huaca Pucllana in Miraflores, Lima’s most popular tourist district. If you’re using the Metropolitano buses, the Angamos stop is within a couple of quick blocks. It’s also reachable on foot from the heart of Miraflores – though we arrived via Uber from our hotel in a different area, after visiting the Huaca Pucllana ruins, we decided to walk toward the heart of Miraflores. I can’t speak to how the area is at night, but walking during the day on Sunday was pleasant.

If you’re hiring a cab or an Uber, the address is Calle General Borgoño 8, Miraflores 15074. The Huaca Pucllana ruins are open six days a week (Wednesday-Monday) from 9-5. There is also a night time tour option available from 7-10pm from Wednesday-Sunday. They’re closed all day on Tuesdays, so make sure you plan accordingly if you’re planning to take a tour.

The daytime Huaca Pucllana tour costs 15 soles, and the evening option costs 17 soles. It’s a great price for a guided tour when you convert it. (At the time of our visit, one sol was worth a little less than 1/3 of a US dollar.)

The guided tours are offered in English and Spanish, and unless you’re visiting as part of a group, can’t be pre-arranged. You simply show up, buy a ticket, and get in line. The tours operate on a first come, first served basis. Luckily, when we visited early on a Sunday morning, we only waited for a few minutes and were part of the next English language group that departed.

Find more information on the official Huaca Pucllana site (there is no English option so you’ll have to use a browser translator if you don’t know Spanish). “Visit the Pre-Incan Ruins of Huaca Pucllana in Lima, Peru”