Get the Best Views of Salzburg at Hohensalzburg Fortress While visiting Salzburg, it’s impossible to miss the imposing Hohensalzburg fortress high atop the hill looming over the city. It offers lots of great history, plus a killer view of Salzburg, so touring the fort should be on everyone’s itinerary in this historic city. It’s most commonly accessed via the inclined railway aka the festungsbahn (you can walk if you really want to) and is especially delightful at dusk. Note: This post contains affiliate links and should you make a purchase I may receive a small commission at no extra cost to you.

Things to do at Hohensalzburg Fortress

First things first, let’s talk about that view. When you exit the inclined railway, head left to go to the “balcony” overlooking Salzburg. You’ll get the perfect panoramic view of the Salzach River winding its way through the city with the surrounding mountains in the background. It was gorgeous in the summer, and when we visited in the winter, the twilight view looked like it belonged on a Christmas card. Photos really don’t do it justice, though if you did a better job than I did in the example above, you might come close. The view from the top of the tower

We began our tour with the audio guide in the Hohensalzburg castle tour. This portion of the fort contains a set of dioramas that show how it evolved and got stronger and more complex over the years as different Bishops modified it. It’s really interesting to see how different layers were added over time as technology improved and the perceived need for defenses increased.

You also get to climb to the top of one of the towers where a viewing deck offers a 360 degree view of the surrounding area. If the weather had been a little nicer, I would’ve spent a while up there enjoying it, but freezing rain with a side of wind gusts doesn’t really lend itself to a pleasant viewing experience. It’s basically the view from the previously mentioned balcony, plus a few extra stories with the added benefit of being able to see in all directions. Every castle has to have a fancy area where the guy in charge lived. This furnace is absolutely incredible with all of the details and puts the plain old metal vents in my walls to shame. The actual quarters aren’t that big, but you do get to look at his bathroom. I also like the ballroom/reception area with its fancy twisting columns. Unlike many more ornately decorated ballrooms in other European palaces that I’ve visited, the centerpiece room in Hohensalzburg Fortress relies less on intricate carvings and paintings and highlights the amazing views of Salzburg below instead. It’s simple and understated, and way more to my taste than many of the gaudy rooms I’ve seen in other places. 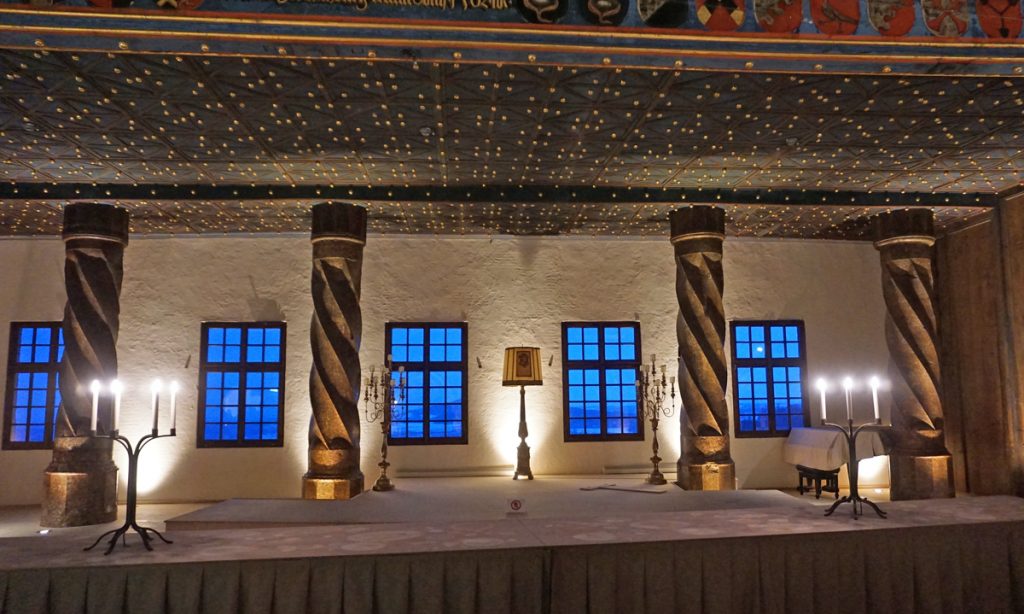 There’s a pretty in-depth gallery on a particular Austrian regiment’s involvement in WWI. In one battle, they blew up the top of a mountain to crush the attacking Italians. I found it interesting because as much as I’ve studied history, especially that of WWII, I really didn’t know much about the role that the Austrians played in these types of battles. And also…they turned the top of a mountain into a weapon. That just sounds insane to me, in addition to being a little bit sad to this lover of natural beauty. This was the thing that excited my sister the most the first time we visited Europe, which I have to say is a little concerning. It contains lots of fascinating and cringe-inducing instruments that were used to torture people, including the terrifying mask above. It was actually used to inflict pain on the wearer, but to be honest, just seeing someone walking around with that on their face would be torture enough for me.

If you want to dine with a phenomenal view, check out the restaurant on site at the fort. The menu is surprisingly reasonably priced – the 2018 menu lists wiener schnitzel (my obsession) with fries at under 15 euros – for something at a major tourist attraction. Hours vary by season, but expect full days and late evenings in the summer months and earlier closures during the winter. Check out the official website for an official menu and up to date opening times.

The city is known for its musical history, and what better way to experience that than by attending a classical music concert inside a beautiful Salzburg fort? Mozart music is played by an ensemble of talented musicians in the Golden Hall aka that ballroom I was raving about earlier. You get the music, the view, and a ride up the funicular. What more can you ask for? Concert packages can theoretically be booked online, but for the life of me I can’t get their website to work, so I’d recommend trying one of the options available through Get Your Guide below. Concert tickets can also be combined with a dining experience to make a perfect date night. I’ve always found marionettes to be a little bit creepy, but I wandered into this exhibit anyway. It only takes a few minutes to walk through, and there are some fabulously detailed puppets on display. My favorite part was the sample one that you could play with to see how the limbs are moved. It’s a little more complicated than I imagined, and let’s just say I won’t be taking up puppetry any time soon. It’s not a must-see while visiting Fortress Hohensalzburg, but it’s worth taking a look.

Getting to Festung Hohensalzburg Visitors can access the Fortress Hohensalzburg two different ways. The easiest is by riding the inclined railway to the top. The Hohensalzburg Castle funicular is a quick ride, and if you’re lucky enough to get a spot in the front of the lowest car, you’ll be treated to a fantastic view of the city as you ascend or descend.

Tickets to the fort and funicular can be purchased online in advance or at the ticket counter. Buying online will save you a few euros, so you should definitely take advantage of that when planning your visit to Salzburg. The tickets are dated, but not timed, so you don’t have to worry about locking yourself in to a set schedule. The ticket counter and entrance to the inclined railway are located on Festungstrasse near St. Peter’s Cemetery (which you may recognize from The Sound of Music). Your other option is to walk. That’s free, but it seems like a pretty daunting climb.

Hours vary seasonally, but in general the fort opens at 9 or 9:30 and closes between 5pm and 7pm. Check their website for ticket sales and hours.

Don’t miss some of these other great things to do in Salzburg!

Looking for more things to do in Austria? Check out these posts: