Everglades National Park in southern Florida is home to some of the most incredible wildlife spotting I’ve ever experienced. The park has multiple visitor centers to choose from depending on where you’re coming from and how much time you have to spend. On the northern end, the Shark Valley Visitor Center offers Everglades tram tours along a paved trail through the fascinatingly diverse ecosystem. If the tram is fully booked, you can still walk or bike on the trail on your own.

What to expect on your Everglades tram tour The tram tours in Everglades National Park depart from the Shark Valley Visitor Center. It’s recommended to arrive a half hour early to pick up your tickets and get ready. The trams have open sides for easy viewing and it’s probably a good idea to seat younger kids toward the interior of the vehicle. Tours last about two hours, and cover the 15-mile paved loop through the Shark Valley area. (Despite its name, you actually won’t find any sharks in the area, which is either good or bad depending on your interest in sharks.) I had a very wrong mental image of the Everglades before visiting – I sort of envisioned them like a bayou. This ecosystem is nothing like that though. The tour guide even cracked a joke about the Everglades being ugly compared to other National Parks like Yosemite. While I’ll agree that it’s far from the prettiest place I’ve visited, the collection of wildlife we saw there in just a few hours was unlike anything I’ve seen in all of my travels. Come for the wildlife. Stay for the mosquitoes. The Shark Valley tram tours are led by a driver and a guide who both assisted in spotting wildlife. I was on the fence about taking the tour vs. renting bikes and pedaling ourselves (a great idea for someone who just got off of a red eye flight), but I was so glad that we did the tram tour. Alligators are really well camouflaged and I know we wouldn’t have spotted 80% of the ones we saw on our own. Our driver also spotted a whole nest of babies right at the start. We also would’ve lost out on the information about the various bird species we saw and how their hunting and fishing styles vary. It was so much better to be able to learn about the birds we were seeing rather than just saying, “ooo look, another bird” and not even knowing what it’s called. Of course, if you actually know something about birds, you might not need the explanations. I, however, hadn’t heard of any of the ones we saw except for the herons, so I definitely needed the info.

I’d try to sit toward the lefthand side of the tram (driver’s side) if I did it again. Almost all of the alligators we saw were out that way, and the waterways on that side seemed much more likely to be suitable for them. If you do end up on the wrong side to see something, the driver made frequent stops when wildlife was spotted and passengers were allowed to stand up to see when the tram wasn’t moving. About halfway through the tour, we stopped at the Shark Valley observation tower for a break and a chance to walk to the top. It’s a viewing deck that allows you to get an elevated angle of the Everglades ad possibly see some wildlife. After spending the first half of the tour at ground level, it was nice to see the National Park from a different perspective. The path to the top is a long, curving ramp, so it’s wheelchair accessible and there aren’t any stairs to climb. We had about 15 minutes to explore the area and then hopped back on the tram for the return trip to the Shark Valley Visitor Center. Along the way, we spotted several more alligators and countless birds. Once back at the visitor center, we walked a short distance back along the tram path to try to catch another glimpse of the alligator we’d seen at the very end. We did manage to spot it, but ended up being more enthralled by the other wildlife in the watery area. From the edge of the path, we could see turtles munching on flowers growing in the water, fish swirling around, and birds hanging out on the edges waiting for a bite. Back toward the visitor center, we watched one anhinga bird fishing for well over half an hour and were absolutely fascinated. These birds dive below the water to catch fish, and this one was magnificent. We could see him gliding below the surface and then he’d suddenly pop up with a tiny fish in the tip of his beak, flip it up into the air, and then swallow it whole. He only failed to surface with a bite to eat once the entire time we were standing there. How to book an Everglades tram tour

The Shark Valley tram tours can be booked in advance on the company’s website or purchased at the visitor center. If you reserve them online, you must pick them up 30 minutes before the scheduled departure. Tram schedules vary depending on the season, so be sure to check the booking site for when you’ll be there. The busier time for visitors is December-April and more tram tours run each day during that season. During the winter months, tours departing during the middle of the day must be purchased in person. Be aware that there is a per-car entry fee for Everglades National Park that is charged in addition to the tram tour fees. What to bring for your Everglades tram tour Other tips for visiting the Shark Valley Visitor Center Check out these other great things to do in Florida: 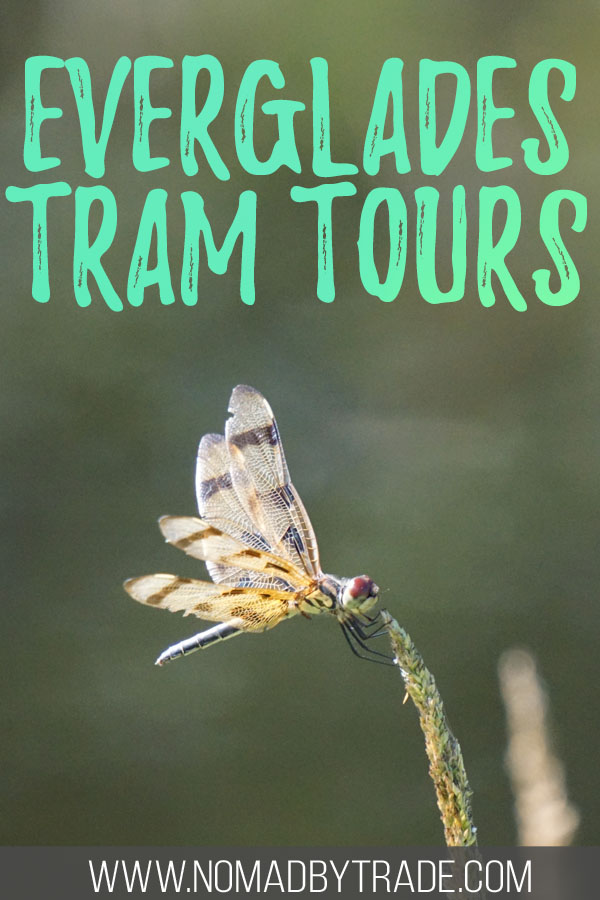