Our first taste of Disney park magic was at the Walt Disney Studios. While we were doing our pre-trip planning, I was looking at the Studios’ ride line-up and was kind of under the impression that it was a half-day park. I wasn’t wrong. Extra Magic Hours allowed us early entry to the park, and the first morning, we did everything but Crush’s Coaster (it was broken) and the shows in less than two hours. We were there on a very cold and rainy Monday in November which undoubtedly contributed to the lack of lines, but I still don’t think it would be a full-day park.

My favorite area of the Walt Disney Studios was the Toy Story part by far. I’m a sucker for goofy photos and there were so many cute spots for pictures in that tiny little section of the park. I also loved the way the fences were styled like K’nex. I wished that the weather had been better the morning we spent there because if it hadn’t been raining, I could’ve wandered through this area for hours. I’m now even more excited to see the Toy Story area that is currently under construction at Hollywood Studios in Disney World.

My favorite ride in the Toy Story area was the RC Racer. I’m a roller coaster junkie and love the stomach-flipping feeling that you get from big drops. Even though this ride is pretty small, it was quite a bit of fun and delivered plenty of that feeling. For those who are nervous about coasters, the sensation was more along the lines of a pirate ship swing ride than an actual coaster.

We did the Backlot Tour next and it was great to see the familiar Catastrophe Canyon since it’s no longer at Disney World’s Hollywood Studios. The tour itself was a little weird though. There was a video with two narrators – one speaking French and one speaking English – but they were conversing with each other in their own languages so half of the dialogue was in French and half was in English. It made it impossible to understand unless you knew both languages. It would’ve been much better to just go with a French voiceover and have English subtitles on the bottom of the screen instead.

Where to eat at Walt Disney Studios

We had an early lunch reservation at Bistrot Chez Remy. We picked it more for theming than the menu and were not disappointed. We were the first table seated that morning because we accidentally showed up a few minutes before they opened. I loved the clever little touches the Imagineers added to really immerse you in the world of Chef Remy. There were giant paper drink umbrellas over some of the tables, and our chairs were designed to look like the tops of champagne corks. I hung my coat up on a fork that was almost as tall as I am. It was exactly the kind of cheesy that I love.

All four of us had steak frites with ratatouille, and it was about what you’d expect for theme park food. The steak was decent, but not memorable, though the fries it came with were delicious. I’d never had ratatouille before, so I was excited to get to try that. It tasted a lot like minestrone to my unsophisticated palate.

The Ratatouille ride consistently gets rave reviews, but I didn’t really fall in love with it. I felt like it was lacking something and was a little hard to follow. I was fascinated by the ride system and the way the cars moved through moreso than the ride itself. I could also see it being a problem for people who get motion sick.

Crush’s Coaster was closed the whole first morning, so we had to come back during Extra Magic Hours on our second morning to ride it. (EMH is typically done at Disneyland Park, but we were there during the transition to the Christmas season, so Walt Disney Studios was hosting the early morning hours at that time.) My sister and I tried to talk our mom, who doesn’t even like kiddie coasters, into riding it. After the first 30 seconds or so of the ride, we were convinced that she should give it a shot. We had gone through the outdoor curve and the slow show scenes and thought it would be perfect for her. Then we got into the main building where things opened up and we were zooming around curves left and right. It packed quite a bit of punch for such a small ride and I loved it. It was the only ride we had to wait in line for more than five minutes for on either day – it had gone up from 25 to 45 minutes by the time we got off – or we would’ve ridden it again. Crush’s Coaster doesn’t offer Fastpasses, so it regularly draws long lines. Getting there early will be your best bet to ride it with a shorter wait.

My only regret at the Walt Disney Studios was missing the shows. I had read about them before coming and was excited to see them, but the timing just didn’t work out for us. We were only at Studios for a couple hours the first morning and less than an hour the second morning and left before the first showings each day. No one else was willing to walk back later in the afternoon to check them out, so we ended up skipping them. 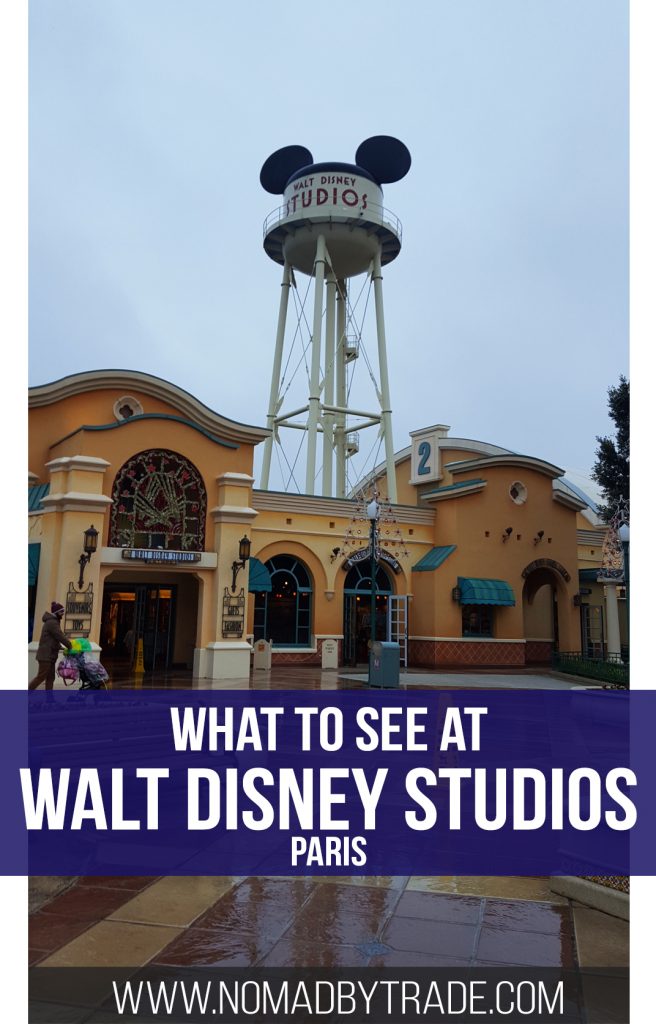