If you’re planning a trip to Iceland, odds are you’ve seen pictures of the most famous waterfalls. You’ll be able to recognize Gullfoss, Seljalandsfoss, and Skógafoss on sight. Far too many visitors overlook the “secret” waterfall, Gljúfrabúi aka Gljúfrafoss on their visit, though. You may have heard the phrase, “don’t go chasing waterfalls” before, but this is one occasion on which you should definitely ignore those words of wisdom.

Whereas Seljalandsfoss and Skógafoss are easy to spot as you approach from the Ring Road, Gljúfrabúi makes visitors work to experience its beauty. It’s well-worth the effort to get up close to this hidden gem.

If you’re driving the Ring Road, you can’t pass up a chance to take pictures of Seljalandsfoss and explore the cave behind it. However, far too many people end their visit there and miss Gljúfrabúi without even realizing how close they are to another beautiful sight.

If you cross the bridge over the stream beneath Seljalandsfoss and keep walking along the path along the cliff, you’ll be treated to several small cascades tumbling down from above. It will be tempting to turn back because it doesn’t look like there’s anything up ahead, but keep going, because Gljúfrabúi isn’t much further.

It doesn’t look like much as you approach because you’ll only be able to see the top of it before it disappears behind a wall of rock. If you want to enjoy the full view – and it’s worth it – you’ll have to either wade into the cavern through the stream or climb the rock wall in front of it.

Wading Through the Stream

Walking through flowing water didn’t seem very appealing on the chilly winter day when we visited, but we were already thoroughly soaked from rain and mist from Seljalandsfoss, so we decided to go for it. You’ll definitely want to make sure you have waterproof boots for this adventure. 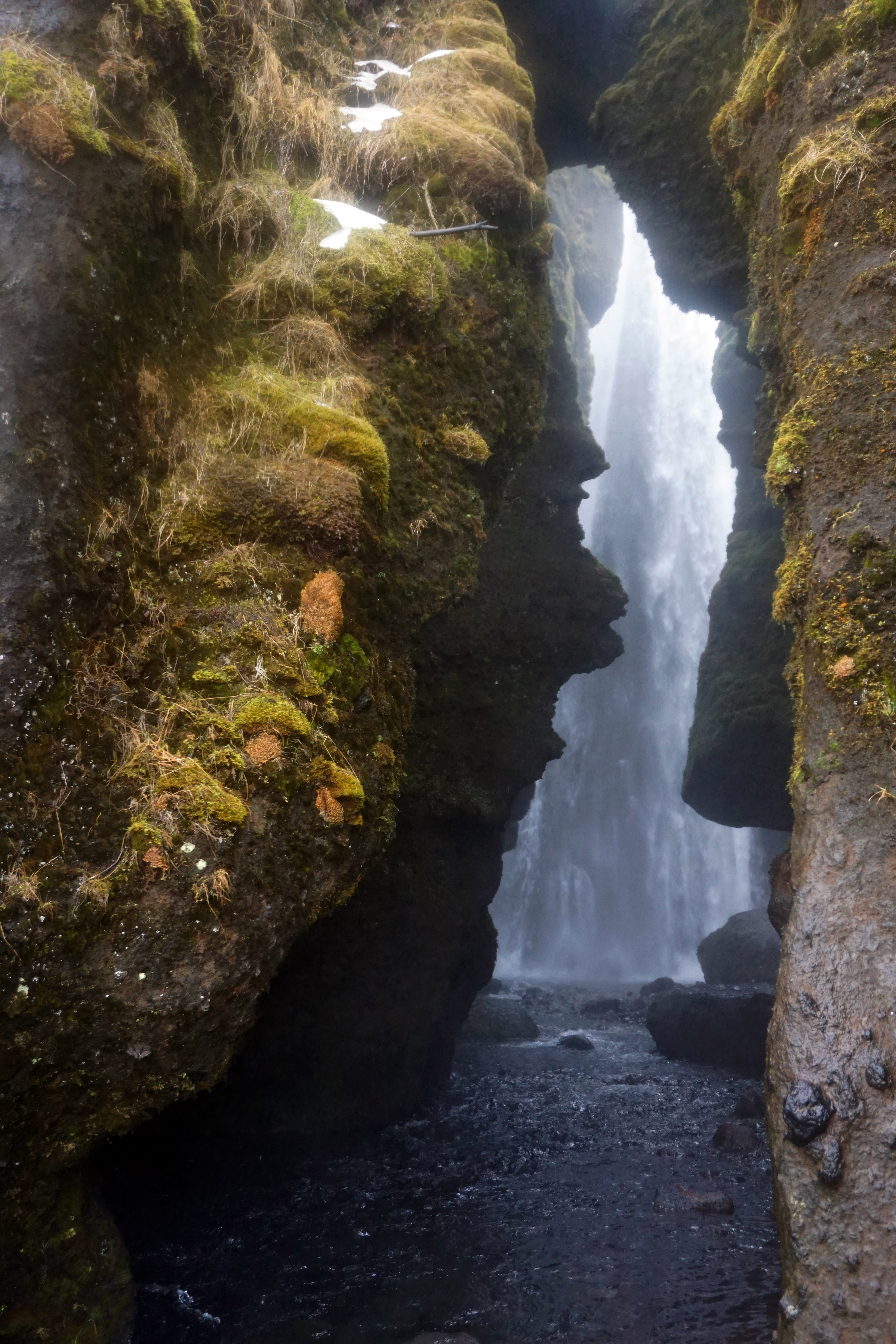 Prepare to get wet

We followed another visitor in, and she did most of the hard work for us. She figured out that there were enough larger rocks that you could step from one to the other without having to put your feet all the way into the stream. Staying to the right allows you to hold onto the wall for balance. I managed to get in and out without getting my feet wet, but my sister slipped on the way out and took some water over the top of one of her boots. I wouldn’t attempt this if you’re afraid of falling.

The walk through the stream only lasted about 15 feet before we emerged into the cavern with a full view of Gljúfrabúi. Once you get back there, you’re on dry land again.

Well, solid land. Nothing back there is dry. The cavern is full of swirling mist from the waterfall and anything you bring back there will get wet. I had a protective plastic bag around my camera and it still got soaked. I didn’t even attempt to shoot any good pictures because I was afraid that I was going to ruin it. 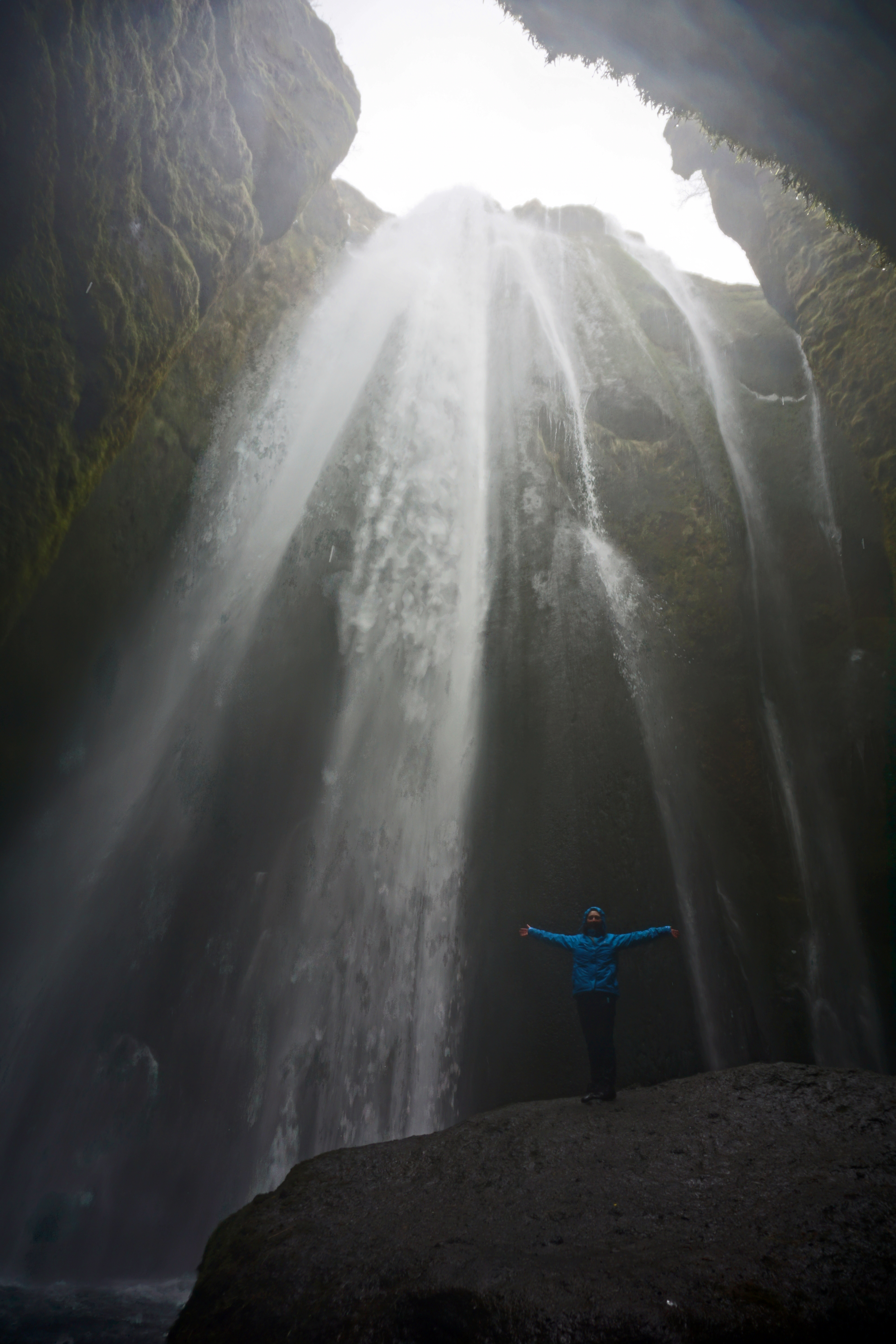 There was one other couple back there, so the five of us took turns snapping quick pictures of each other. It was a cool feeling to be back there enjoying the “secret” natural wonder roaring down in front of us.

The View From the Top

After we waded back out, we decided that it would be worth it to climb the rock wall to get the view from the top. It’s a slightly tough climb that was made a little treacherous by the mud caused by the constant rain that day, but we made it easily without any special equipment and less-than-ideal hiking boots.

We worked our way up about half way and then got to a spot where chains had been bolted into the rock face so you could hold on as you scooted along a narrow ledge. We were pretty high up by that point, so looking down below was a little intimidating.

When we got to the top, we were faced with another rock wall. I had seen pictures of a small ladder there before, but it looked like it had been broken. Only one plank was still there, wedged up against the base of the bulging rock.

My sister tried to walk up it like a balance beam, but it was slippery from water and mud and her rain boots didn’t have the kind of traction needed, so she slipped off of it. We figured out that if one of us got a leg up on it and the other held their foot in place so it wouldn’t slide down, we could get up high enough to grab onto the rocks and make our way up to get a view. 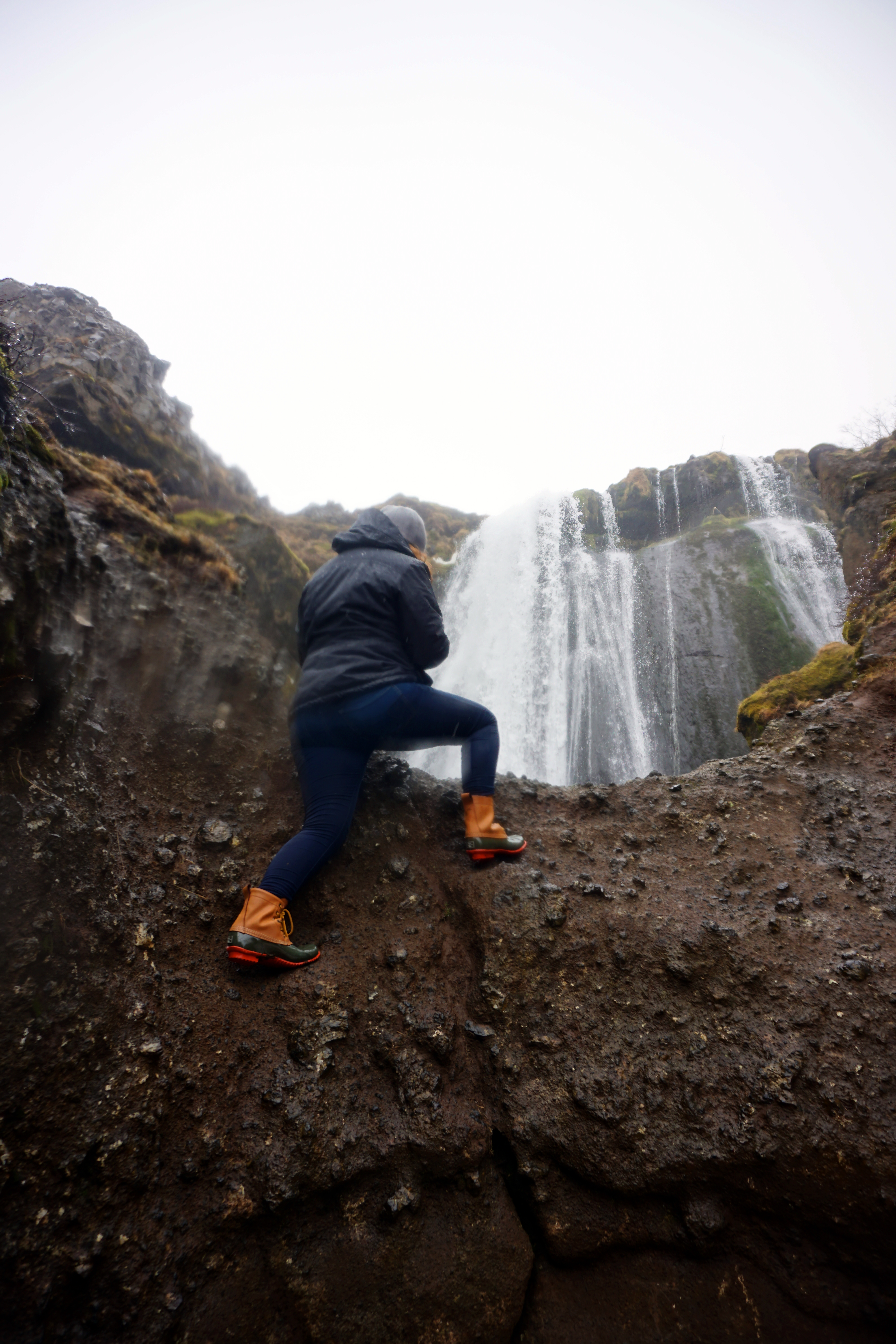 I’ve done some rock climbing on artificial walls, but this was my first time doing anything like bouldering in the real world. It was a lot of fun, but kind of stressful because 1. my boots did not have the kind of grip necessary for that 2. I was carrying a $1000 camera and 3. my American health insurance doesn’t cover me outside of the US.

After taking a few pictures, I determined that the best way down was just to lower myself as far as possible and then jump the last few feet. I passed my camera to my sister, felt my way backward down the face of the rock, and then took a leap into the snow-covered mud.

This was a little adventure, but we had so much fun. It was by far my favorite out of the waterfalls we saw in Iceland, just because of the adventure involved in getting to it. I’m used to seeing sights like that safely behind railings and safety barriers, so getting to experience this waterfall up close and unrestrained felt wild and unlike anywhere else I’ve ever been.

We were thoroughly soaked and covered with mud, so it’s a good idea to plan on changing clothes if you’re going to attempt this. Or wear those super cool rainproof pants that I chose not to buy for the trip. The good news is that there’s a bathroom – tiny and not exactly spotless, but functional – near the Seljalandsfoss parking lot, so you’ll be able to change if you need to. Guard any electronics you bring with you closely, as they can quickly become soaked. I wished I had brought the waterproof camera I had in my suitcase for this adventure because I came pretty close to ruining my good one trying to take pictures in the cavern.

Have you visited Gljúfrabúi? Have you had any other unique experiences in Iceland? Let me know in the comments.