15 Pictures to Put Diamond Beach on Your Iceland Bucket List The Ring Road around Iceland’s perimeter is jam packed with stunning scenery. One of my most memorable stops was Diamond Beach, a spectacular black sand beach where icebergs from the famous Jökulsárlón lagoon wash up. As the ice chunks head out to sea, some of them are pushed back ashore by wind and waves, creating a landscape of ice boulders that is a virtual playground for photographers. It’s beautiful, and a must-see stop on your Ring Road trip. Keep reading for my fifteen favorite pictures that will inspire you to visit Diamond Beach in Iceland. The waves endlessly beating against the ice bergs is a great reminder of the force of nature. The water never ceases. If you’re brave enough to venture to the water’s edge, you’ll be treated to delightful scenes of water swirling around the ice boulders nestled in the black sand. 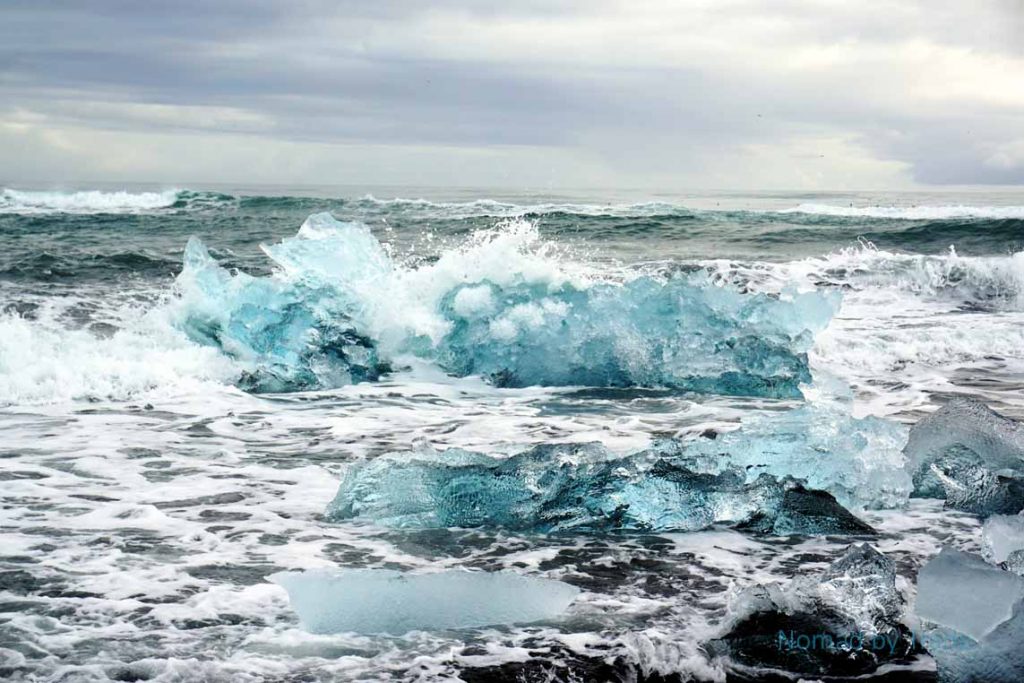 The best ones still have the blue tint of glacial water. For more spectacular blue ice, check out the tour to the nearby ice cave that departs right from Jökulsárlón. I grew up in a place that gets its share of winter weather, but I’ve never seen anything quite like the field of ice boulders on Diamond Beach in Iceland. I love this one for the beautiful blue ice and the large wave that’s about to break off in the distance. 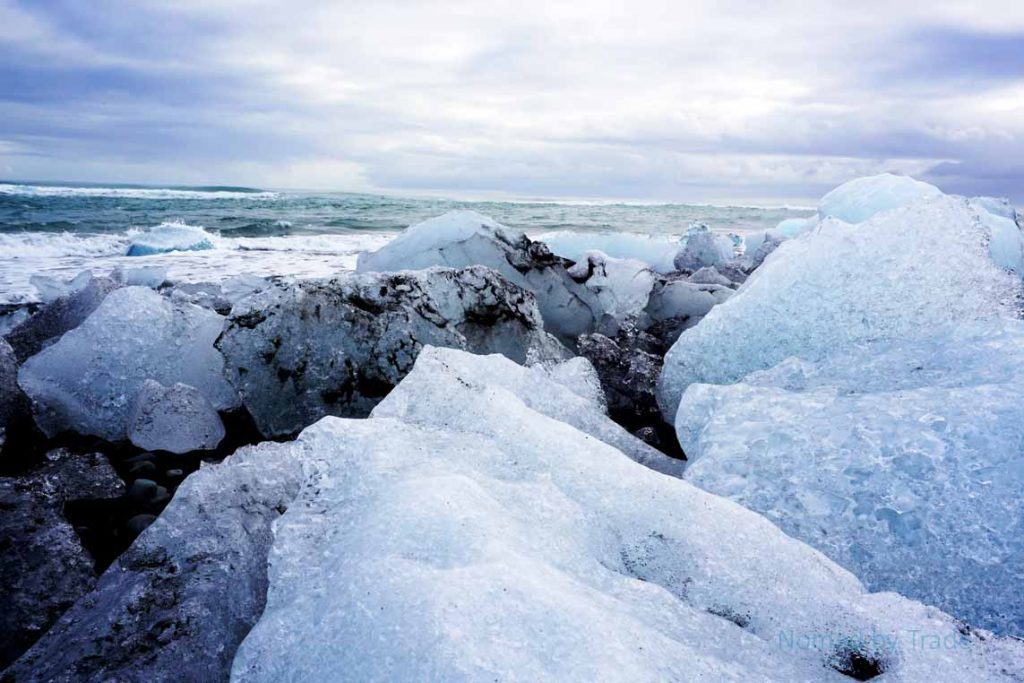 Some of the ice boulders contain swirls of volcanic ash from long ago eruptions (and yes, some of them just have black sand on them). 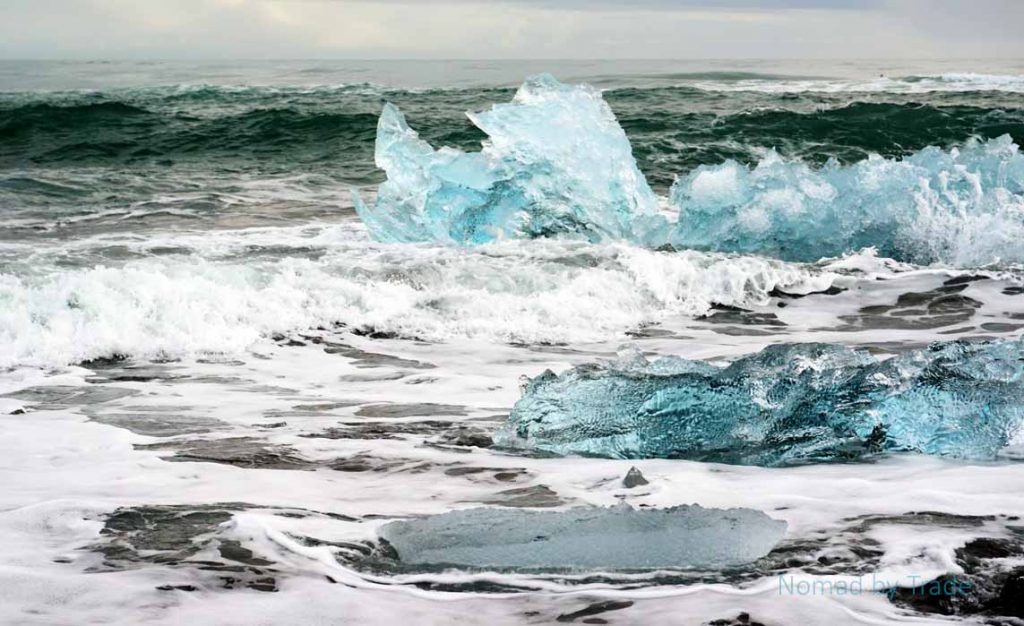 These ice bergs look massive, but every wave rocked and jostled them like they were ice cubes. Water is ridiculously powerful. I had to be quick to get this shot right by the water because there were bigger waves coming in and I couldn’t afford to get my shoes wet when I was about to head up onto the glacier that spawned these very icebergs. 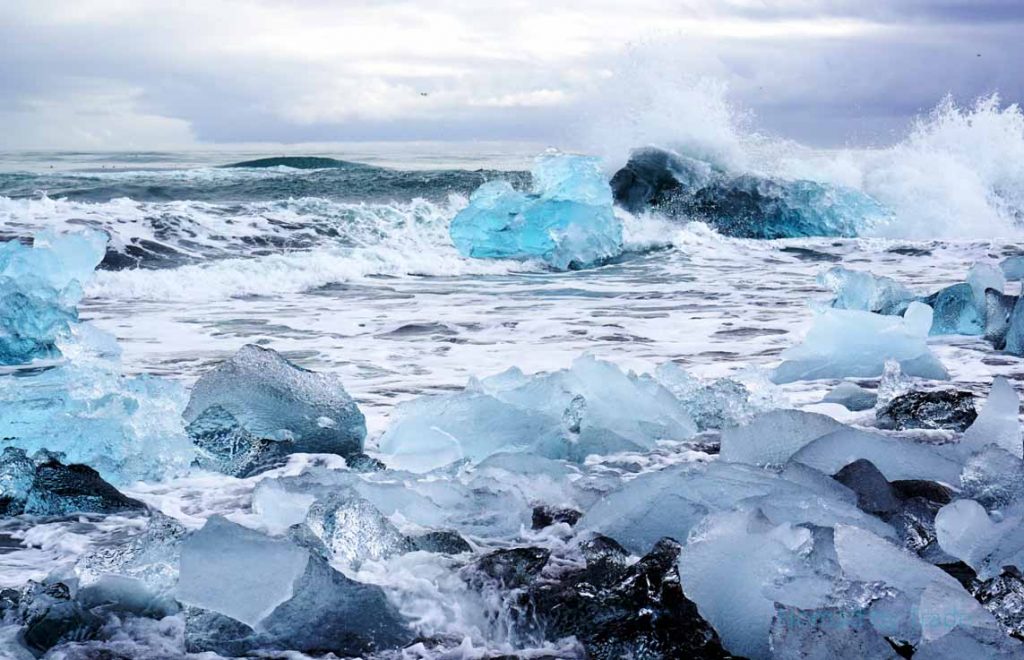 Sea spray like this always reminds me of a scene from “The Little Mermaid.” Enjoy that brilliant blue though. 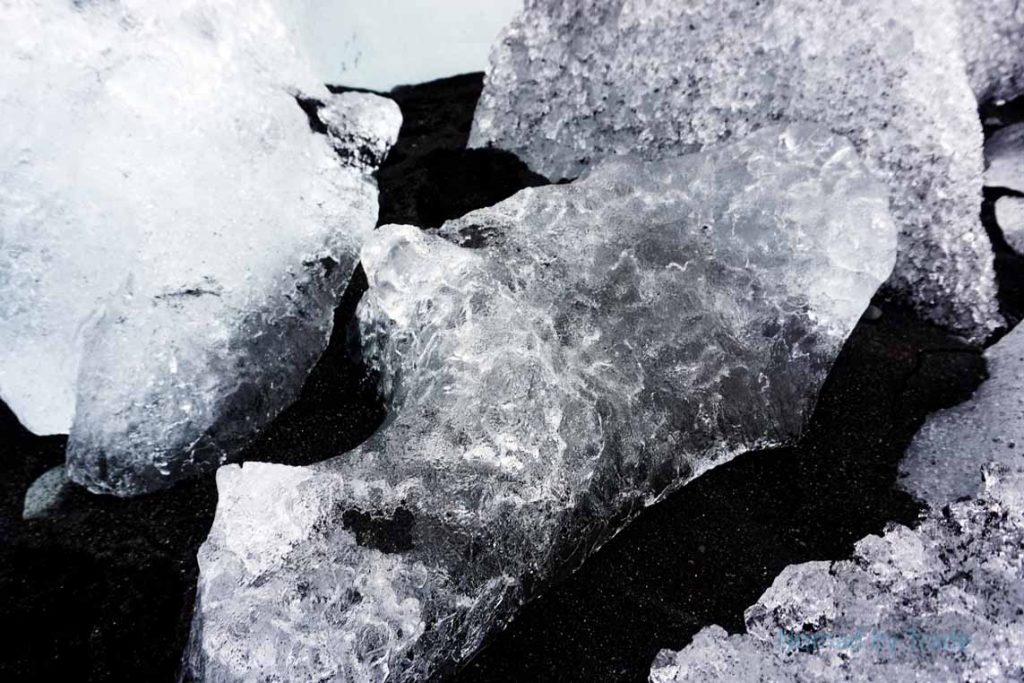 The ice boulders have a somewhat strange texture. I’m not sure what causes it – the glacial forces, exposure to seawater, melting, it could be anything – but it’s very intriguing to look at. These ice bergs had to have weighed at least a thousand pounds, but the waves were shoving them around anyway. This end of the beach was quieter, but it also had smaller chunks of ice. I loved that all of the chunks of ice had different textures. Some of them were very blue, some were completely clear, some were more milky. The contrasts, especially when the black sand beach is factored in, make for beautiful photographs.

Getting to Diamond Beach

Don’t miss a chance to stroll among ice boulders at beautiful Diamond Beach in Iceland! It’s very easy to find. As you approach Jökulsárlón on the Ring Road from the west (coming from Reykjavik), you’ll want to turn off to the right just before you cross the bridge (Reverse these directions if you’re coming from the other direction). There’s a fairly large dirt parking area, and from there you can walk right to Diamond Beach. It’s about a five-hour drive fro Reykjavik, so I wouldn’t plan on making it a day trip, but if that’s your only option, it’s possible.

The amount of ice bergs and boulders that you see will depend on the weather and time of year. The direction of the wind and water can have a significant impact on the amount of ice that you get to see, so factor that into your plans.