Travel mistakes and disasters can happen to anyone, even seasoned travelers. I recently went on a family vacation touring through central Europe and despite the fact that we’ve all logged countless miles and nights on the road, we made lots of travel mistakes. From flight delays to lost luggage to deceitful rental car companies, we had it all. Here are our biggest travel disasters and what you can do to avoid making them yourself (or recover from them).

Three members of my family had their luggage lost for the entire 10-day vacation. This included ski gear, Christmas presents, and almost all of their clothes. This was the biggest travel disaster I’ve ever encountered in four years of constant flying. Check out all of the awful details of our lost luggage saga with Air France and Lufthansa. We were talking to my dad over the phone through the glass like it was a prison visit.

How to prevent lost luggage

What to do when your luggage is lost 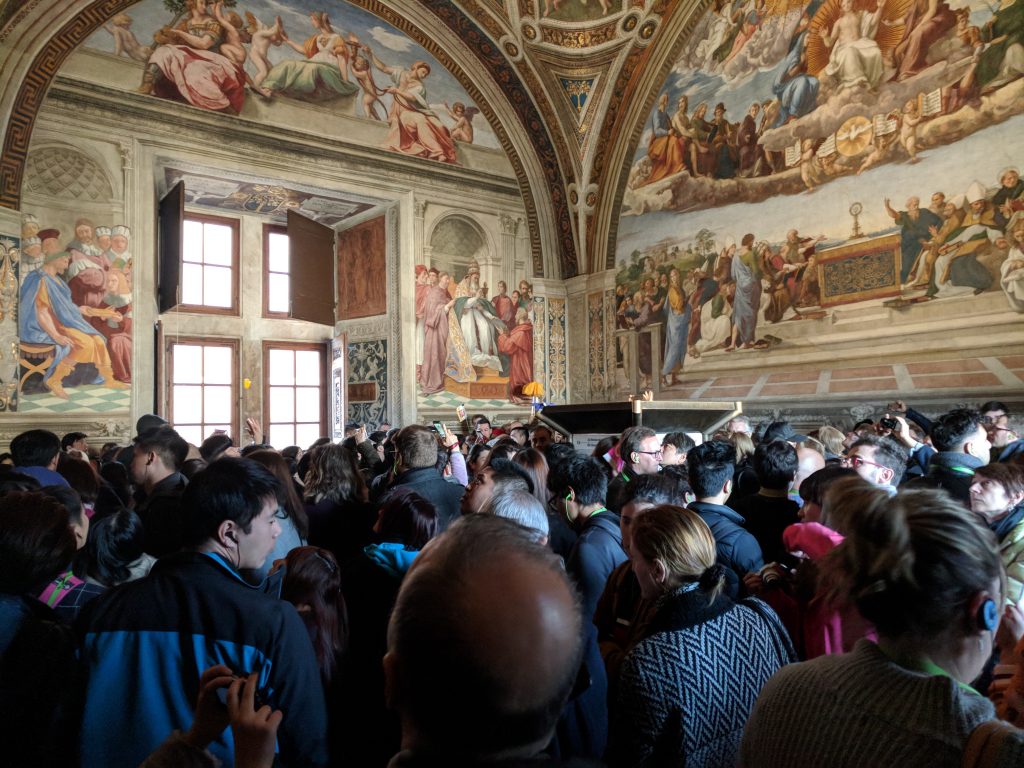 The days of mass tourism means that if you don’t pre-book tickets for popular places like the Vatican museum, you could miss out or find yourself waiting in really long lines. Doesn’t this look fun?

Nowadays, you can easily book tickets in advance for the biggest tourist attractions. You might have to spend a little bit extra for the convenience, but this is one area in which it is definitely worth it. We missed out on Auschwitz because we didn’t look for tickets until a couple of weeks before our trip. When I visited a couple of years ago, we were able to walk up on the day of our visit and get our free admission tickets. In the years since, they’ve added an online booking system and if you don’t look for tickets early, you might not find any on your dates. The same goes for other popular places.

How to avoid missing top attractions

What to do if attraction tickets are sold out 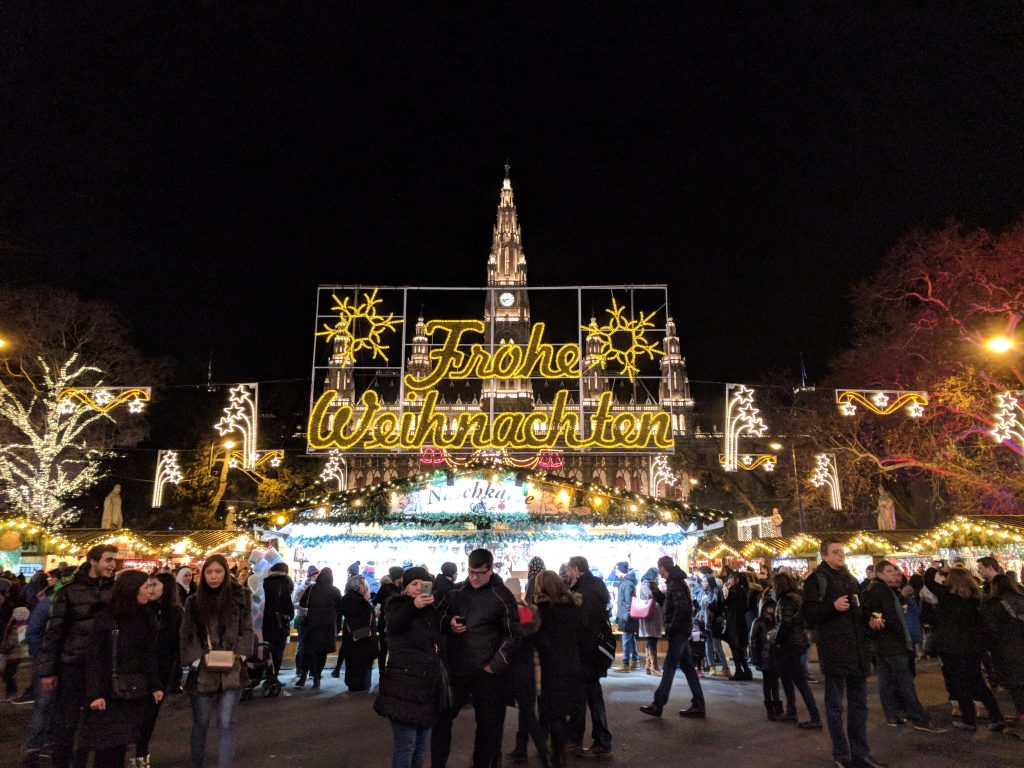 We had to rent a car if we were going to get to experience the Vienna Christmas market on Christmas Eve.

My mom booked us a 10-passenger van that was comically large for the narrow European streets we were driving through. She got a discounted booking through AAA with Dollar Rental to be picked up at the Munich airport. It was supposed to cost about $730. When we got there, they wanted way more money than was stated on our reservation. According to the woman at the Hertz desk (they operate Dollar), the reservation rate was merely a suggestion and they could actually charge us whatever they wanted. In this case, the base amount for the rental was about 200 euros more than what we booked it for. She gave us a 100 euro discount and said that was the most she could do without a manager and that we’d have to talk to one when we brought the car back. They also insisted that we pay an extra 150 euros for insurance that was never disclosed on the rental reservation. On top of that, they had to put a hold for refueling the entire vehicle. The total came to almost $2000 when it hit my credit card.

My mom was ready to walk away, but we looked around the crowded Munich airport and knew there was no way we’d get a vehicle large enough to hold seven adults on short notice for anything less than what Dollar/Hertz wanted to charge us, and there was no way we could keep our vacation plans intact without a car. We decided to go ahead and make the rental.

After leaving, we started to research and found out that Dollar rental is operated by a third party in German airports. A quick Google search of “Dollar rental Germany” returns pages and pages of results of people complaining about getting scammed by them. Apparently their game is to charge customers for bogus damages a few weeks after the fact because they get commission off of their billings. Sure enough, a few weeks after the van was returned, my credit card got hit for $339 for damages we know weren’t there when we dropped it off.

How to avoid getting scammed on your rental car

What to do when your rental car company scams you

If you fly often enough, you’ll eventually encounter a flight delay. Sometimes they’re minor and not much to worry about. Sometimes they mean you miss your connecting flight. Sometimes your entire flight get cancelled. None of them are fun, but there are ways to survive. Our family got to experience all of the above on our Christmas vacation.

On this trip, we experienced all three. I personally had two flight delays (one short and one two hours long), and my dad, brother, and brother’s girlfriend got to experience a flight delay, missed connection, and a cancelation all in one bizarre trip. These are the most disruptive and frustrating travel mishaps that you’re likely to encounter.

How to avoid flight delays and missed connections 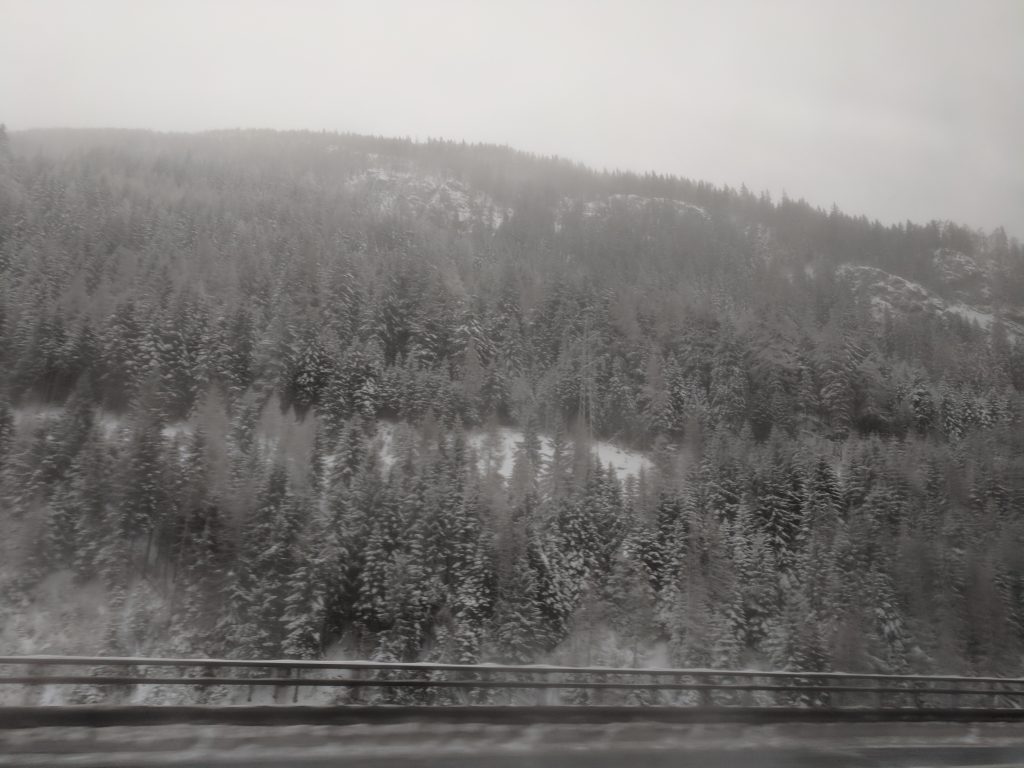 The view from my dirty bus while siting in a traffic jam.

I had booked myself a scenic train ride through the Alps from Munich to Verona with a connection on TrenItalia to Venice. The train was nice, I had a row to myself, and there were bathrooms and a dining car that I could get up and walk to whenever I wanted. Unfortunately, just before crossing the border into Italy, we were unceremoniously dropped off at a train station and told to board buses to our final destination. The buses weren’t labeled, of course, so I wasn’t really positive I was on the right one until we got pretty close to Verona. My nice, comfy train ride was replaced by several hours in a cramped, dirty bus sitting in traffic jams on an Italian freeway. We got one break at what has to be the world’s most crowded rest area, and we got a whopping ten minutes to get inside and use the bathroom and get something to eat. The lines were so long for everything that I only had time to pee and grab a package of apple struedel for my lunch. Naturally, I missed my train to Venice. Fortunately, I’d bought a ticket from a fare class that allowed me to rebook within an hour of my scheduled train, so I did make it to Venice only an hour later than scheduled and what could’ve been a major travel disaster was merely a minor travel inconvenience.

How to prevent missing a train

What to do if you miss a train 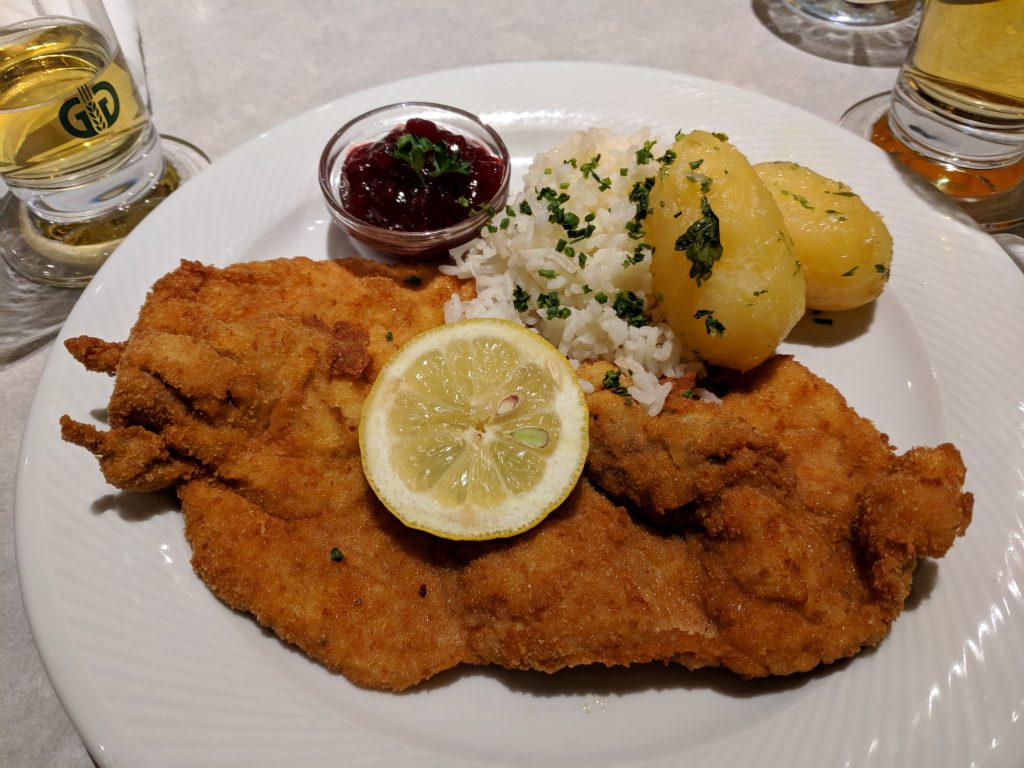 Buy your Austrian schnitzel in euros.

At many places, when we used our credit or debit cards, we were asked if we wanted to pay in the local currency or convert it to US dollars. You’ll typically be asked the same question when withdrawing money from ATMs overseas.

Also: pay attention when using the ATM because my dad tried to cancel a transaction on our last night in Poland because he’d put an extra zero in the withdrawal amount, but hit the wrong button and ended up with hundreds more zloty than he had wanted.

How to avoid paying extra due to currency conversion

What to do if you pay in the wrong currency 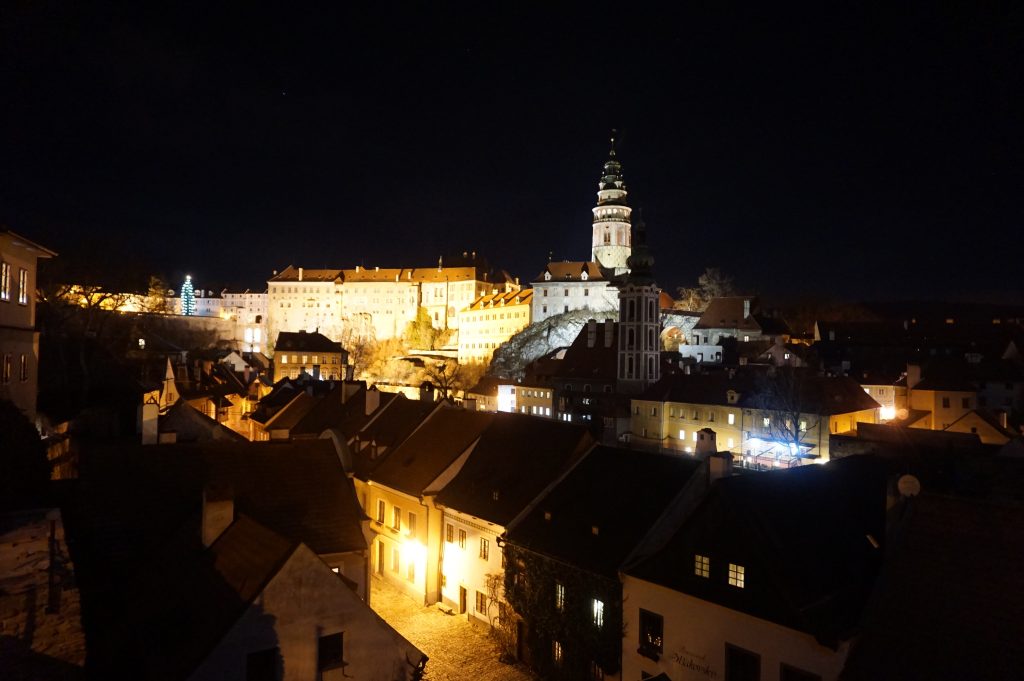 I got to spend ten minutes in Cesky Krumlov. Needless to say, it was not enough.

Travel mistake: Doing too much too fast

Our whole family spent ten days together doing a whirlwind trip through Austria, Poland, the Czech Republic, and Germany. We spent a couple of nights at my brother’s apartment, then headed across the country to spend about 18 hours in Vienna, drove 5 hours up to Krakow and spent one full day there, drove another 5 hours to Prague and spent about 20 hours there, headed back to my brother’s place, visited Salzburg for about 3 hours, and then spent about 12 hours in Munich on New Year’s Eve. It was crazy and it felt like we spent more time in the car than we did in the cities. There were so many things we missed out on in the cities we visited. I was lucky that I’d already been to all of them or I would’ve been incredibly disappointed.

How to prevent overdoing your schedule

Once you book your flights, sit down and do some research on what activities are available in the places you want to visit. Based on your travel style and energy level, you should be able to get a sense of how long you’ll need in each city to do the things that are most important to you. If you’re going to Paris and want to see the Eiffel Tower, visit Versailles, and spend a whole day at the Louvre, you’re going to need to book yourself more than two nights there.

What to do if you schedule too much on your vacation

What’s the biggest travel disaster you’ve ever experienced? Did you learn anything from it? Share your wisdom in the comments so the rest of us can learn from you.

Don’t feel too bad for us though. We managed to have an amazing time despite all of these disasters. Here are some of the more fun highlights of our vacation: 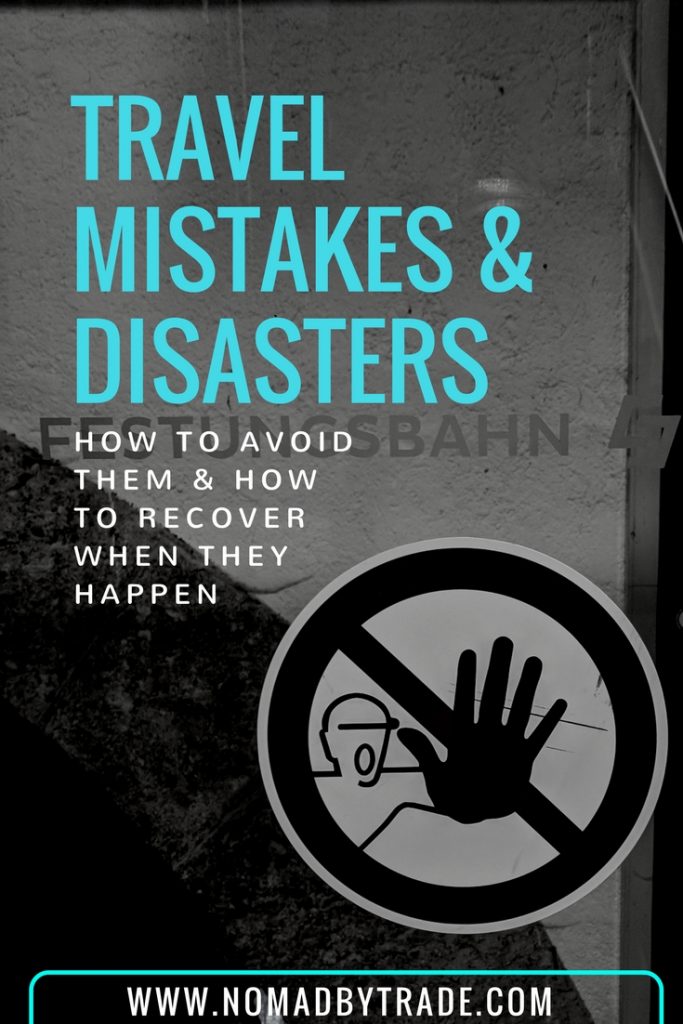 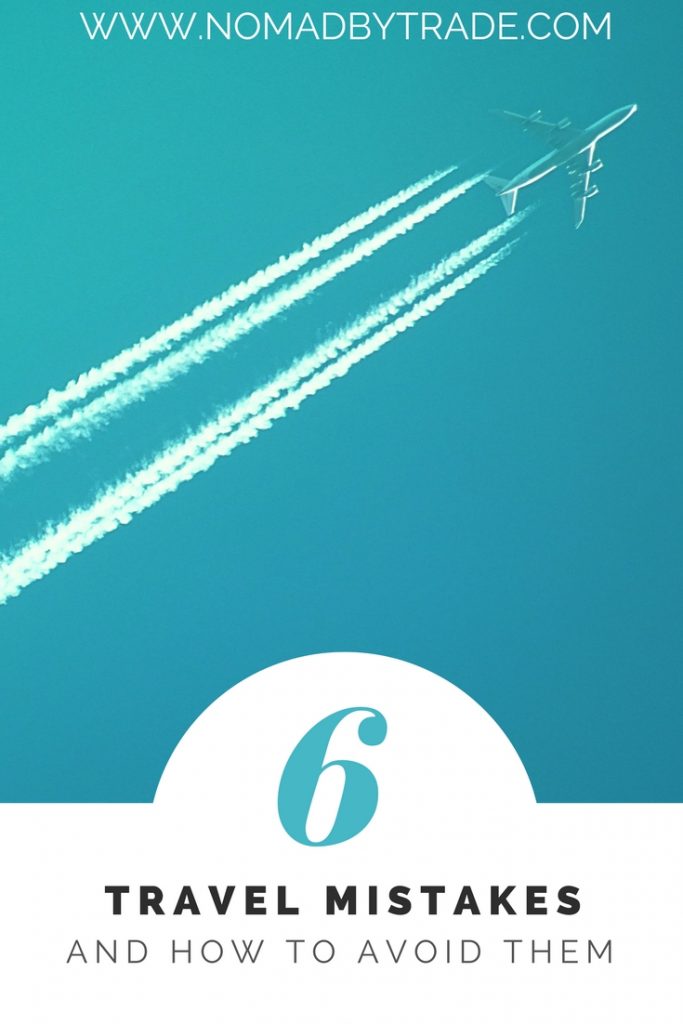