The Best Pierogi in Krakow: Pierozki U Vincenta Whenever anyone asks where to eat in Krakow, Poland, I immediately jump in and tell them that they have to try pierogies from my favorite restaurant there. In five trips to Europe, the pierogi at Pierozki U Vincenta (translated to Pierogi Mr. Vincent – named after artist Vincent Van Gogh) are still my favorite meal. So much so that on my second trip to town, I dragged my family for over a kilometer just to eat what I have deemed to be the best pierogi in Krakow. This did not go over well as we’d spent the morning touring the Wieliczka Salt Mines, but the food definitely won them over.

We originally found Pierogi Mr. Vincent by sheer luck. My friends and I were walking past and it looked cool, so we tried to get a table. They were full for lunch, but we were able to make a reservation for dinner. The restaurant is located in the Kazimierz area, which is the old Jewish quarter of Krakow. We came back later that evening for our dinner reservation and spent two hours stuffing ourselves with what was by far my favorite Polish food in Krakow. Note: This post was not sponsored and we purchased all food on both visits. All opinions are my own.

The best pierogi in Krakow

The thing that makes Pierozki U Vincenta one of the best places to eat in Krakow is the variety of unique flavors on their menu. You can get traditionally filled pierogi anywhere around town, but the unusual (and delicious) flavors available here really set them apart. On our first visit, four of us managed to sample 10 different flavors because you used to be able to split orders between two flavors. When I brought my family back a couple of years later, the seven of us ordered NINETY pierogi in 9 different flavors. We were so full that we didn’t even try the last flavor we were eying – the “pirate” flavor that has dumplings filled with coconut, raisins, and rum.

We couldn’t bear to part with the last few pierogis, so my dad asked for a to go box that almost got tossed by security at our next stop, Wawel Castle in what may have been the funniest moment of our entire trip. He actually put them through the x-ray machine there and the guards were completely baffled. I’ll never forget the baffled look on the security officer’s face when he pulled the pierogies out of the scanner. If you’re looking for unique dining in Krakow, Pierogi Mr. Vincent needs to be on your itinerary. There is no shortage of pierogi places in Krakow, but what sets Pierozki U Vincenta apart from the rest is the wide range of flavors on the menu. Sure, you can get a regular old potato pierogi anywhere, but if you want some with chicken and spinach or – my favorite – chicken, beans, and spicy peppers, you’ll have to look a little harder. Other favorites included the chlopskie – pierogi filled with bacon, sausage, egg, and onion) which I nicknamed the “breakfast pierogi” and the pirate dumplings – pierogis filled with coconut, almonds, rum, and raisins.

Don’t worry: if you’re more into traditional Polish food, Pierozki U Vincenta serves that too and I can vouch for their delicious Russian dumplings (not actually of Russian origin according to our waitress). The restaurant’s namesake is Vincent Van Gogh, so while you’re eating, you can take in tributes to him throughout the small dining area. The best touch is a recreation of his famous Starry Night painting on the ceiling, which seems like it would make a nice, romantic touch for an evening date. Getting to Pierogi Mr. Vincent

Pierogi Mr. Vincent is located at Bożego Ciała 12. It’s a 1.4km walk from the Rynek Glowny, and about 3/4 km from Wawel Castle.

If you’re ready to taste the best pierogi in Krakow, check out the restaurant’s official website for contact information, hours, and a copy of their menu. It’s in Polish, but my browser’s translation function did a decent job.

Looking for more things to do in Krakow? Check out these great sights: 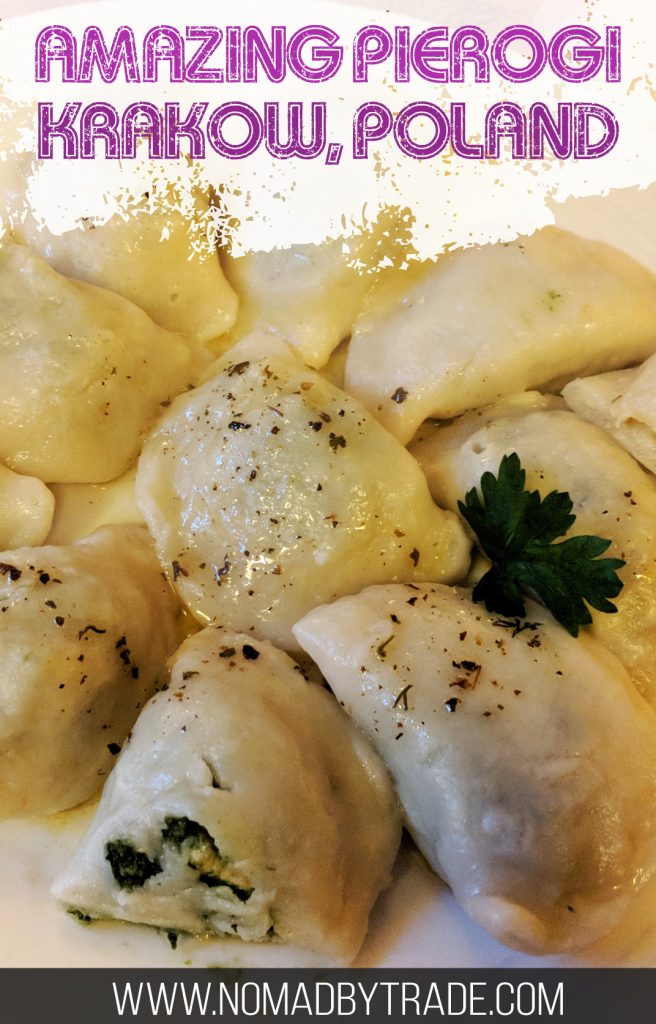