One of my favorite things about traveling for work is getting to try new restaurants in the areas I visit. After eight weeks in Albany, New York, I’ve compiled my list of my nine favorite places to eat. Read on for my Albany dining guide.

This brewery is housed in an old water pumping facility that was originally used to pump water from the Hudson river to supply the city. Nowadays instead of water tanks, it holds vats of beer, although the still-operational crane from its previous life still hangs above the dining room as a reminder of the past.

I was determined to order a salad, but a delicious BBQ pork entree caught my eye on the menu. The dish is layered with scalloped cheesy potatoes on the bottom and topped with pulled pork, melted white cheddar, and delicious BBQ sauce. Health-wise, it’s about as far away from a salad as you can get, but it was well-worth it.

I loved the atmosphere at this Irish pub. You had to climb down a few stairs to get into the half-street level bar felt a little like entering a secret hideout. There was a decent sized bar and a handful of tables, so between that and the low ceilings and dim lighting, it felt very intimate.

Their menu was pretty standard Irish pub food, so I went with a shepherd’s pie since that’s my perfect collection of foods all thrown together in a dish that warms your heart. I was a little disappointed by my first bite, but I think I just happened to get a dry part because the rest of the dish was amazing. When the mountain of food was set down in front of me, I figured I’d maybe get through half of it and take the rest home for leftovers the next day. I was wrong; I inhaled all but a few bites because I just couldn’t stop eating it. The veggies were crisp, the mashed potatoes were delicious, and the cheese baked on top had a perfect little bit of crunch to it. You’ll have to head out of Albany a bit to visit this spot, but Troy is only a few minutes up the road and Dinosaur BBQ is well worth the short drive. It’s a New York chain, and I’ve been to several of their locations, including the original in Syracuse. Whenever I’m in New York state for work, I try to have dinner at one of these restaurants if I can find one nearby. All of the locations I’ve been to feature eclectic décor, and the  Troy location has the added benefit of an outdoor patio overlooking the Hudson River. There are two different sauces on the table for you to dress your own meat – a regular and a spicy. I’m partial to pulled pork when I get BBQ, but I’ve been told by co-workers that their chicken is phenomenal as well. I always get their BBQ fried rice as a side because it’s both delicious and unique, and their macaroni and cheese and baked beans are great as well. This small chain of sports bars has a few locations around the area, and it’s a great location to watch a game if you’re looking for good food to accompany it. The original location in Albany is fittingly right across from the medical center, and they’ve expanded to other locations in the area.

I fell hard for their Thai peanut salad – I’m a picky eater, and I’m pretty sure this is the first time in my life that I’ve ordered a salad exactly as it appeared on the menu without asking for them to keep certain items off of it. it’s unique because it doesn’t come with dressing, substituting a delicious peanut sauce that is perfect for dipping the grilled chicken in. The cold noodles seemed like an odd choice at first, but they ended up being my favorite part of the salad. I inadvertently visited this bar/restaurant on Mardi Gras – I should’ve seen this coming since the menu is Cajun themed – and was pleased to find the place draped in beads and full of people celebrating. There was a live band playing for the first couple of minutes I was there, but they went on break when they finished that song. Unfortunately, the large crowd meant that most of the menu items I was interested in were gone, so I ended up with a ham po’ boy sandwich to go. I was a little disappointed because I’m used to po’ boys being served hot, so when I got back to the hotel room and found out that it was cold, I wasn’t thrilled. The ham was fantastic though, and the bread was top notch. I naturally had to go back again to try what I really wanted, and was thoroughly delighted by their crawfish and tasso ham mac and cheese (I ordered it with just ham). It was incredible. It’s some of the best mac and cheese I’ve ever had. I’m drooling just thinking about it.

This English pub is adorable. It really looked like a little cottage, and the interior was well-themed. There’s a cute little garden in the front that  features a classic red English photo booth. The first level of the restaurant has a perfect neighborhood-style bar that was lined with patrons. I happened to stumble across trivia night, so while I didn’t play, I also enjoyed listening to the questions being read off. I chose to sit upstairs where it was a bit quieter and had some fantastic fish and chips. I’m not generally a fan of fish, but theirs looked good enough that I decided to try it and I was not disappointed. The batter was perfectly crispy, and I left completely stuffed.

Wellington’s caught my eye as I was walking back to my car from another restaurant, so I made a point to visit it later in the week. I was mostly drawn to the sleek décor seen through the large windows, so I checked out their menu online and decided to give it a try. I got a fantastic seat in an armchair by the window, and I even got a view of the capitol building.

I started off with their Saratoga kettle chips since they were only 99 cents. I was glad they were so cheap, because I didn’t like whatever seasoning they used and only ate a few of them. The restaurant was redeemed by the next two courses though.

Though their menu has numerous fine dining options, I opted for a simple caesar salad with grilled chicken added. I really liked it despite the fact that I forgot to ask for the dressing on the side so it had a little more on it than I usually use. The lettuce was chopped into the perfect size to eat it gracefully – a vastly underrated quality in salads if you ask me – and there were large croutons that offered a delicious crunch. The chicken on top was what blew me away though. Most of the time when you add chicken to a salad, you get a sad, bland little piece of luke warm meat. This was not the case at Wellington’s. The chicken I got was so good that I’d gladly order it for an entrée if that was an option. It was steaming hot and coated in a delicious seasoning that gave it just a little bit of a spicy kick.

I almost never order dessert when I’m eating out, but there was a “pumpkin pie” option that was so different that I couldn’t pass it up. It came with two cinnamon waffle triangles with pumpkin gelato and cinnamon whipped crème all stacked together. It was a little melted by the time it was brought to me, but it still tasted fantastic. I love finding unique things like that, and I especially love pumpkin pie.

This bar and restaurant was recommended by a local. It has a cool, biergarten-like atmosphere with large tables and benches on the first floor. There’s a large bar area with tons of beers on draft and in bottles and cans. If you’re feeling adventurous, they even have a mechanical bull to try. I had an incredible pulled pork sandwich with a side of fries. I’m somewhat picky about pulled pork, and this was perfectly moist and not too fatty. The fries were also my favorite style of battered crispiness.

I found myself in Albany on National Grilled Cheese Day, so what better way to celebrate than by having lunch at Capitol Melts, a grilled cheese place just down the hill from the capitol building? I had an incredible mac & cheese melt with added bacon. The mac & cheese was good enough that you could just eat that – you can, in fact, order it as a side. It was the perfect way to celebrate Grilled Cheese Day.

Capitol Melts is a great place to grab a quick lunch during the week. It’s only open until 2 pm on weekdays, so you’ll have to time your visit for the workweek. It’s a fast counter-service style place, so you’ll be able to grab your food and get back to work quickly if you’re in the area.

Have you visited any of these restaurants? Did I miss any favorites that I should hit if I go back again? Let me know in the comments.

Enjoy the Albany dining guide? Don’t forget to pin it for later. 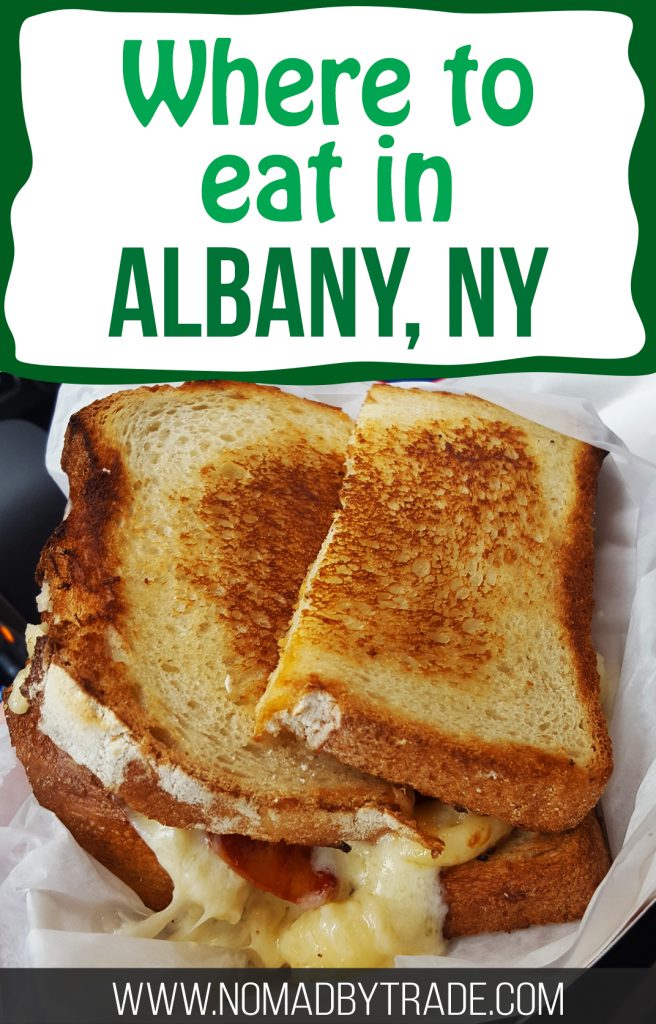